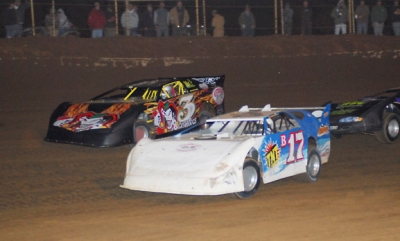 WHEEL, Tenn. (Nov. 10) — After a lead-swapping duel with Iowa invader Mike Collins, fellow front-row starter Byron Michael of Florence, Ala., led the final 29 laps of the Hart Hastings-Henry Smith Memorial 50 at Duck River Speedway to wrap up his championship on the Southern Regional Racing Series. | Slideshow

Michael, who won six of the last 10 SRRS races in sweeping to the title, earned $3,000 for the victory. Brandon Kinzer of Allen, Ky., finished second followed by Tony Morris of Murfreesboro, Tenn., and Collins of Council Bluffs, Iowa, who led 15 of the first 21 laps while battling with Michael. Daniel Miller of Shelbyville, Tenn. rounded out the top five.

Collins and Michael duked it out from the beginning with Collins out front when the second caution appeared on lap 18 for Michael Luna's spin. On the restart, Michael continued to pressure Collins and took a lead he'd never give up on lap 21.

The leading Michael was on his way to sewing up the series championship, but that was assured on lap 30 when Billy Mayo, the closest title contender, pulled out with an 18th-place finish.

With Michael in control through the second half of the race, Kinzer worked his way into second with the 16th-starting Morris in third. A final caution appeared on lap 47, but Michael held off Kinzer the final three laps to take the checkered flag first.

Michael's Performance Connection-powered Rocket Chassis is sponsored by TNT Fireworks. ... The event drew 43 cars on a chilly evening. ... Jerry Owens' car was leaking fuel at the outset of the feature, drawing a caution flag. He pitted and returned for the restart and finished 14th. ... The postseason SRRS banquet is scheduled for Jan. 11 at the Doubletree Hotel in Murfreesboro, Tenn. ... The 2008 SRRS schedule has already been released. The first of 21 races is scheduled for March 29 at Checkered Flag Speedway in Hohenwald, Tenn., with $5,000 going to the winner.