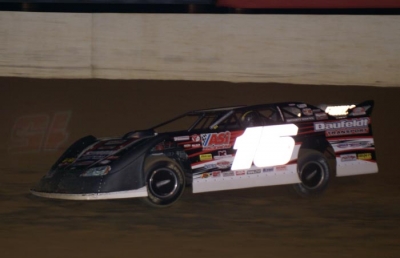 CALVERT CITY, Ky. (Oct. 27) — Brian Birkhofer of Muscatine, Iowa, led every lap at Kentucky Lake Motor Speedway for a $10,000 victory in the unsanctioned Commonwealth Cup. The scheduled 50-lapper lasted fewer than 40 laps after the track was forced to shorten the feature because of a curfew.

"Caution after caution, I just hoping that (harder tire) would fire back up," Birkhofer said of the race slowed by five yellow flags. "The racetrack browned back up, and I just kind of had the preferred line, I guess you'd call it, and we held on."

Dennis Erb Jr. of Carpentersville, Ill., pressured him from the second spot but settled for that runner-up position in the season-ending event at KLMS.

"I figured (Erb) was trying to run lower and wait to for me to make a mistake on the cushion," Birkhofer said. "I changed my line in (turns) three and four to hopefully block him a little bit, not let him get that clean line. Because if he got a clean shot getting into (turn) one, he might have (passed) me and won the race."

Four drivers, including former race winner and Hall of Famer Scott Bloomquist, were late to the starting grid and didn't take the initial green flag. Kentucky drivers Michael England and Chris Combs were late to the grid as well as Brady Smith of Solon Springs, Wis. When Bloomquist made a lap under caution to go around the track and exit to the pits, he gestured his displeasure and later angrily confronted track promoter Sherri Heckenast.

Don O'Neal of Martinsville, Ind., driving the No. 16 usually driven by Justin Rattliff, was the fastest qualifer among 64 entries. Friday's opening night of the Commonwealth Cup was rained out.