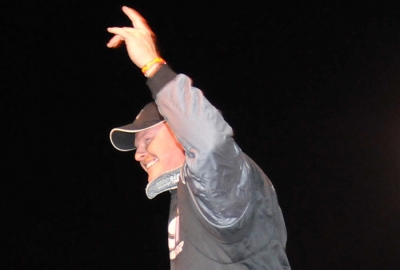 David Breazeale waves from atop his car. (theinfieldidiot.com)

In a 50-lapper slowed by a few early cautions, no one had an answer for Breazeale as the final 30 laps ran green at the quarter-mile oval near the Mississippi-Alabama border.

"It has been a long time coming, I think it was October of 2008 the last time I won a race with any importance," Breazeale said. "This is not one of my best tracks, and it has been kind of hit or miss for us. We have won a couple of races here, but when we are off, we are in the back. We just happened to hit it tonight, good night for the team and I am just so glad to be back in the winner's circle."

Thrash, who started 10th, advanced eight spots by lap 21 but was never able to shrink Breazeale's lead late in the race while scoring his fifth straight top-three MSCC finish at Whynot.

Shep Lucas of McKenzie, Ala., ran second early in the race but ended up 18th.

Notes: Breazeale's MasterSbilt Race Car has a Cornett Thunder powerplant and sponsorship from Henderson Motorsports, L&D Trucking and Hoosier Tires. ... His 16 career MSCC victories is tied for third all time. ... The 34-minute feature ended at 10:29 p.m. ... At the outset of the feature, a four-car tangle in turn two slowed the action with Keith Miller of Sumrall, Miss., getting the worst of the accident, altering the entire right side of his No. 291. Neil Baggett was also involved and restarted on the tail. ... Rick Rickman's nosepiece was damaged in an early caution. ... Jim McDuffie was the victim in an early scramble that sent him into the turn-three wall. ... Scott Creel climbed the wall at the end of the backstretch on the second lap, knocking him out. ... Last year's top MSCC rookie Steve Bryan of Collinsville, Miss., rallied from his provisional starting spot on tail to finish 11th. ... Drivers failing to make the feature: Michael Santangelo, Dewayne Morris, Cody Smith, Ed Guidry, Joseph Joiner, Stacy Caldwell, Frank Wilson and Chris Hoomes. ... The series takes a four-week break before April 23-24 action at Hattiesburg (Miss.) Motorsports Park and Jackson (Miss.) Motor Speedway.