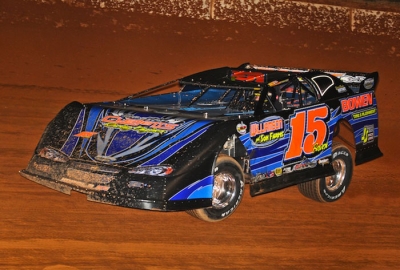 “We came last year to this race and got in a little tangle on the first lap," said the 38-year-old driver from Whiteville, N.C. "We didn’t make but a few laps." | Postrace notebook | Slideshow

His 2010 trip to the 4/10-mile oval lasted 40 laps — and ended much better. Inheriting the lead on the 11th lap when polesitter Chris Ferguson of Mount Holly, N.C., dropped to the infield, Bowen led the rest of the way for his first career victory on the Carolina Clash Super Late Model Series.

“We’re just now getting our program together where I think we can be competitive in these kind of races," Bowen said. "I really felt like I could go anywhere on the track tonight. I was trying to protect the bottom, and just stay consistent.

“This is an ’09 chassis. We’ve had about 10 races on it. It’s actually our backup engine. I messed up the good engine in Brunswick (Ga.) and it’s the small engine. But it worked out good here.”

The race appeared to be Ferguson’s to lose as he commanded the lead from the green flag. He was followed by outside front-row starter Donald Bradsher of Burlington, N.C., early with Bowen, Franklin and reigning track champion Pursley in pursuit.

But with 10 laps down, the first caution came out and Ferguson suddenly pulled into the infield, earning only the night's Hard Luck Award.

Bowen took over the lead, followed by Franklin, Pursley and Weeks, who was piloting the Don and Herbert Way-owned No. 54. Bowen maintained the lead during a series of yellows for cut-down tires and other mechanical issues while the 10th-starting Smith worked his way up to third by lap 16.

The most serious caution came with 16 laps remaining when Luke Roffers and Justin Labonte got piled up into the inside wall down the frontstretch.

With cautions and attrition, Bowen didn't have to worry with lapped traffic over the final 15 laps in completing his victory.

Notes: Bowen's Rocket Chassis is sponsored by Williamson & Son Farms and Bowen Tire & Alignment. ... The event marked the Carolina Clash’s 200th race in its 11th season. ... Beautiful weather greeted racers after the event was postponed a week because of rain. ... Fast qualifier Chris Ferguson contributed his $250 pole winnings to the Make-a-Wish Foundation and drove two laps carrying a banner flag in memory of Skyler Trull preceding the race. As requested by the Trull family, a handoff of the banner occurred between Ferguson and Larry Trull, father of the young girl who died of leukemia. The crowd was then instructed to release balloons. ... G.R. Smith, piloting the Beaver Bail Bonds No. 75, rallied from 15th to finish eighth. ... Carolina Clash competitors return to action March 27 with a $4,000-to-win event at 311 Fastrack in Madison, N.C.