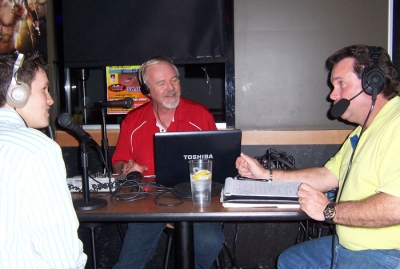 Carolina Speedway’s Clint Elkins and Mark Gibbons wanted to get the word out about the exciting dirt racing going on weekends in Gaston County, N.C. Radio personalities Joe Sellers and Jeff Ward of WGNC AM-1450 in Gastonia were hoping to fill a time slot. The connection has resulted in Red Clay Tuesday, a radio show held every Tuesday from 6-7 at Buffalo Wild Wings in Gastonia, N.C.

“We’ve been trying for a couple of years to partner with a radio station and 1450 AM was interested in doing some work with us,” Elkins said.

Sellers grew up racing go-karts and knows first-hand the love of dirt racing in the Southeast. He is the son of Bill Sellers who was on late Hall of Fame driver Stick Elliot’s crew, doing anything from bodywork to tires.

The venue allows fans to view Dirt Late Model which the drivers bring on location. They can meet the drivers, listen to the show and ask questions.

“We’re friends of the race car driver Chris Ferguson,” said Shannon Brown who was on hand for last week’s show.

“We’ve had a great turnout. (Last) Tuesday it was standing room only and people were parking up and down the street and walking down,” Elkins said. “Buffalo Wild Wings has a great atmosphere and is a right up the road from Carolina Speedway.”

Special guests both weeks included members of the Trull family. The whole community is gearing up for the Carolina Clash opener and 10th annual Skyler Trull Memorial at Carolina Speedway, scheduled for March 19-20. The race honors the memory of Larry Trull’s daughter Skyler, who died leukemia when she was 5.

“When she was 4 and a half she said to me ‘I don’t want anyone to forget me’,” Trull recalled.

Past proceeds have gone to the Make-A-Wish Foundation, which arranges trips for sick children.

“We really need a show like this. Dirt tracks are closing,” Trull said. “We also enjoy Carolina Speedway. It’s a great location, is fan friendly and safety for fans and drivers is always stressed.”

“I’m good friends with the Trulls and happy to come out and do this,” said Ferguson who talked about his future racing goals. “Last year I learned a lot on the Clash tour. Ultimately I’d like to drive in some of the big dirt tours like the Lucas Oil and World of Outlaws series as well as make it to NASCAR’s highest level.”

“We are hoping to have a lot of special guests from the racing community this year, including NASCAR personalities,” said Elkins.