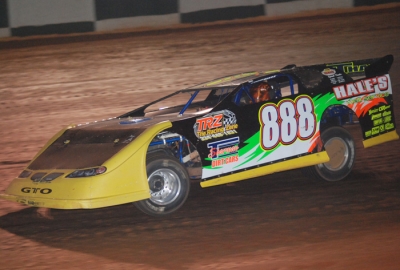 GLENCOE, Ala. (Feb. 27) — Immediately after Dennis Hale captured the fifth and final heat race Saturday night at Green Valley Speedway, the LaGrange, Ga., driver quickly slowed and drove through a streak of mud in turns one and two. | Cook grabs pole for Bama Bash

His plan? To kick up a little mud and add a little weight to his No. 888 car that, along with other Bama Bash heat race contenders, cruised around the track for 10 minutes worth of caution laps during a lengthy cleanup for James Cline's turn-three accident.

"I knew it was going to be close," Hale said a few minutes later, worried he burned off so much fuel he'd be too light at the scales. It was more than close. In the infield, his car weighed exactly 2,300 pounds, the minimum legal weight for competitors in Southern Regional Racing Series competition.

Hale was glad to dodge his second bullet of the night during a weekend when SRRS is running for a $10,000 winner's purse for Sunday night's feature. Earlier Saturday, Hale was late to arrive to the qualifying grid and got just a single lap instead of the two most drivers received. His lap was good enough to start outside the front row in the fifth heat, and he fought off a few challenges from polesitter Ronny Lee Hollingsworth of Northport, Ala., for the victory.

"I was just happy to make the show. The car hasn't really been good (in practice) all weekend," Hale said. "But you know how this racing is — you go from zero to hero real quick."

Eric Hickerson of Linden, Tenn., ended the '09 season on a hot streak, reeling off a handful of top-five finishes including a victory in the second-to-last SRRS event of the season at Duck River Speedway in Wheel, Tenn.

Hickerson started 2010 off strong with a runner-up finish on Nov. 20 at Tennessee National Raceway's Icebreaker in Hohenwald, Tenn., and he's looking good at Green Valley Speedway after a heat race victory that gives him a second-row starting spot in the main event.

He's using the same MasterSbilt he drove last season with few changes. It has new bodywork, but it looks a like it did last year.

"If stuff's working at the end of last year, why change it, you know?" Hickerson said Saturday evening in the Green Valley pits before his heat race victory.

Hickerson is considering chasing SRRS points this season with most of the races within a few hours of his home. "As long as I keep the ball rolling," Hickerson said with a smile.

Jacob Grizzle of Blairsville, Ga., has spent most of his four-year Late Model career in crates, and like many racers, the 19-year-old mechanical engineering student competes on a tight budget. In heading for the Bama Bash, just his seventh Super Late Model event, he decided to push the budget to the limit, buying nine brand new tires for the Green Valley race.

"I'm pretty sure that's the most we've ever bought for one race," Grizzle said.

Whether his investment pays off is still unknown, but Grizzle got off to a solid start in Saturday's preliminaries. He topped his qualifying group and then raced to a steady second-place finish in his heat race to earn a fourth-row starting spot for Sunday's feature.

"I just came down here wanting to make (the feature)," said Grizzle, who also dabbled in asphalt Late Model racing. "I thought we had a pretty good chance, but I didn't think we'd set fast time in our group."

"We wouldn't be near where we're at if it wasn't for him," said Grizzle, whose best career Super Late Model finish was sixth last year in a Tennessee Thunder DirtCar Series race at Boyd's Speedway in Ringgold, Ga.

Grizzle started racing go-karts at age 7 and eventually moved into Crate Late Models, first racing with the Fastrak Racing Series and then running NeSmith Chevrolet Series events last year, when he won a half-dozen races for his best-ever season.

Grizzle tried a little asphalt racing, but found it so expensive he decided to stick with dirt. He sold his asphalt Lefthander chassis for the engine he's using at Green Valley.

MasterSbilt house car driver Ray Cook practiced a new car along with the trusty car he won many of his races with last season, and eventually decided to go with the older car. "It's hard not to. It's been too good to us," Cook said. But he said the team has still been experimenting with it, running setups during Florida Speedweeks they'd never tried before. "There's still a lot unknowns," Cook said. ... Chris Ferguson of Mount Holly, N.C., entered a Jack Starrette-owned car he'd never driven before, and found it didn't have the "quick" steering he's accustomed to in his own cars. "I feel like I'm driving a wheelbarrow," Ferguson cracked, holding his arms wide apart and rotating them slowly. ... Six cars with No. 22 entered the Bama Bash.