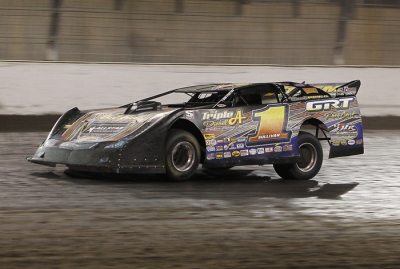 Sullivan, the first-year house car driver for GRT Race Cars, led all 40 laps and outran Billy Moyer of Batesville, Ark., for a victory in the sixth annual Texas World Dirt Track Championship, but not without feeling the heat from the Hall of Famer the last 10 laps.

“I knew Billy was back there. I could smell him," Sullivan said. "I saw him a couple times and I could hear him. I kind of knew if I could slow down and just hit my marks an just get off the corner that he couldn't make a pass. I just didn't want to overshoot the corner and make a mistake. I didn't want to lose the race because of me."

The fourth-starting Moyer got alongside Sullivan a few times and tried many different lines to run him down on the 4/10-mile track, but fell short at the checkered flag by four lengths.

Sullivan was glad to be starting on the pole against a stiff field of a challengers for an event that drew 55 Late Models.

"Any time you have this type of competition, it is way easier to start in the front and let them figure out how to pass you, instead of you pass them," Sullivan said. "If you are going to win these races, you have to qualify or do it in the heats and it panned out tonight for us."

“That was some drama,” Sullivan said. "I just tried not to give him an easy way around. If he was going to get around he was going to have to run high. I wasn't going to let him get under me. I just told myself to breathe, keep cool and hit your marks."

At the outset, Sullivan battled early with Bubba Mullins of West Monroe, La., who made his return to SUPR action. Sullivan built a comfortable lead before a lap-four caution for debris, and Mullins was shuffled back to fourth on the restart by Moyer and Cummings when another yellow appeared on lap five.

Sullivan and Moyer edged away from the field on the restart, holding a five-second lead on the field before Chris Holley slowed in turn two for a lap-18 caution with Sullivan leading Moyer, Moore, Hughes and Cummings. After a final caution when Mullins got out of shape and made contact with Kenny Merchant entering turn three,

Over the final 10 laps, Moyer stayed right with Sullivan, looking for a way into the lead. After following Sullivan, Moyer tried the opposite of Sullivan's groove the final five laps with Moyer appearing faster in turns three and four while Sullivan held his own in turns one and two.

Moyer pulled within a car length on lap 37 in turn three, but Sullivan never faltered. Moyer lost ground when he hit a rough patch in turn three, breaking his momentum and allowing Sullivan to edge away for a .633-second victory.