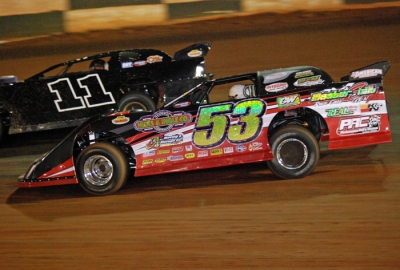 GLENCOE, Ala. (Feb. 27) — Ray Cook of Brasstown, N.C., knows racers can't count on anything until they see a checkered flag. But the 38-year-old driver also knows he entered this year's Bama Bash after winning last year's event, he topped all of Saturday's qualifiers by three-tenths of a second at Green Valley Speedway, and he dominated a heat race to earn the pole for this year's 13th annual event, sanctioned for the first time by the Southern Regional Racing Series. | Preliminaries notebook | Slideshow

"It's ours to lose, I guess," Cook said of the $10,000-to-win main event scheduled for Sunday evening at the 3/8-mile oval. But just as quick as he said that, Cook listed a litany of reasons of why he might be vulnerable, from track conditions that might give an edge to the outside front-row starter (Stacy Holmes) to the always dreaded flat tire. "We'll just see what we get tomorrow."

And while Cook's confidence isn't shaken, he's winless in seven starts this season after a red-hot start in '09. "I feel like we're behind, because this time last year we had won two races," Cook said.

But Cook was never behind in capturing the first heat race, cruising to a caution-free victory over Chris Wall of Holden, La., to win by nearly a straightaway on a race-filled, chilly evening when temperatures dipped into the 30s and racing went past midnight. Wall and Casey Roberts of Toccoa, Ga., who survived despite tire smoke from his left-rear tire showing most of the race, also advanced to the main event with Cook.

Other heat race winners were Holmes, of Munford, Ala.; Tim Busha of Boaz, Ala.; Eric Hickerson of Linden, Tenn.; and Dennis Hale of LaGrange, Ga. Only Cook and Hickerson won from the pole position in heat races while the other three came from outside the front row. Fifteen driver are locked into Sunday's feature lineup with the remainder of the field set by Sunday's consolation races.

In the second heat, polesitter Jeff Smith of Chatsworth, Ga., struggled on the first lap, allowing Holmes to take command and McCool to grab second. Smith settled for third in a race slowed by Josh Watson's turn-four spin on the 10th lap.

In the third heat, Busha kept polesitter Jacob Grizzle in check for a caution-free, 15-lap victory with Randy Weaver getting the third and final transfer spot.

Hickerson won the fourth heat after overtaking Michael Page of Douglasville, Ga., on the second lap and pulling away in a race slowed by three cautions, among them Brian Reese's lap-three spin in turn two (Reese was running fourth) and third-running William Thomas stopping with problems on frontstretch on a lap-eight restart. Page finished second while Donald Bradsher inherited the final transfer spot from Thomas.

In the fifth and final heat, Hale held off occasional challenges from polesitter Ronny Lee Hollingsworth of Northport, Ala., for the victory. Ronnie Johnson was third in a heat that had the most serious Super Late Model accident of the night with fifth-running James Cline getting into the turn-three wall in a wreck that required a two-wrecker removal of his No. 3.

Notes: SRRS is sanctioning the Bama Bash for the first time. ... Besides SRRS Late Models, Limited Late Models and Crate Late Models (both unsanctioned) are battling for $2,500-to-win feature purses on the weekend. ... Making his first career Super Late Model start was Bubba Pollard of Senoia, Ga., a standout asphalt Late Model driver who bought a former Clint Smith GRT Race Car. He spun on his first qualifying lap. ... Pollard is racing out of Smith's hauler. Smith, a former Bama Bash winner, missed Saturday's action to attend the wedding of fellow World of Outlaws driver Steve Francis in Bardstown, Ky., but plans to be at Green Valley on Sunday. ... Randall Walker, who won last month's $6,000 Ice Bowl event at nearby Talladega Short Track, scratched from qualifying at Green Valley.