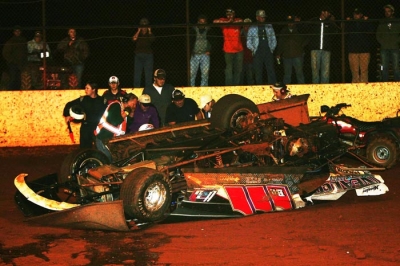 GLENCOE, Ala. (Oct. 20-21) — Ronnie Johnson of Chattanooga, Tenn., pulled off a tripleheader sweep at Green Valley Speedway's Top Guns Tournament as he captured victories in all three Late Model divisions. The victories were worth $9,500, including $5,000 for the Super Late Model victory.

Johnson's victories in the Super Late Model and Limited Late Model events came from the pole position, while his victory in the crate Late Model feature was a little unorthodox. Johnson started outside the front row in the crate feature and actually crossed the line second, but an apparent disqualification gave him the victory.

Tim Busha of Boaz, Ala., rallied from his seventh starting position to finish second in the Super Late Model feature ahead of Mike Collins of Council Bluffs, Iowa, who started 17th. Dingus Griffin of Alexandria, Ala., and 18th-starting Lee Sutton of Taylorsville, Ga., rounded out the top five. Bo Shirley's car flipped when a wheel came off during the main event, but he wasn't injured.

Greg Chumley of Attalla, Ala., was second in the crate feature and Brian Qualls of Piedmont, Ala., was the runner-up in the Limited Late Model race.