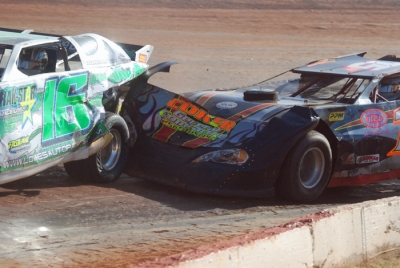 Although he wore racing gloves, Walker also complained his fingers got cold while steering his No. 15 to to an unsanctioned 50-lap victory at the third-mile oval across the highway from one of NASCAR's showplaces.

Mike Walker doubted his 24-year-old son's hands were truly cold. "It was just the white knuckles, that's all," Walker said with a wink.

Indeed, starting on the pole on a racing surface where passing was at a premium, Walker had a few tense moments in keeping his car out front in the 25-car field.

"We got into lapped traffic pretty heavy there, and it got sort of rough toward the middle of the race," Walker said. "But ultimately I hung on to it, I guess, so everything worked out pretty good."

Walker survived a scrape with 2007 Ice Bowl winner Billy Mayo of Cleveland, Tenn., on the 10th lap, then kept fellow TST regular Dingus Griffin of Alexandria, Ala., in check the rest of the way for the richest victory of his career.

Dad was proud that Walker drove an 8-year-old Warrior Race Car to victory, especially after his car lost its brakes over the final 10 laps. "He's a good wheelman," Mike Walker said.

Griffin, who started fourth and took the second spot from Stacy Holmes just after the lap-10 restart, settled for second, although he pulled nearly a half-track ahead of everyone else along with Walker through the race's late stages.

Fifth-starting Chris Jones of Alabaster, Ala., finished more than six seconds behind in third, just ahead of seventh-starting Travis Pennington of Winston, Ga., and 10th-starting Tim Busha of Anniston, Ala., TST's reigning track champion. Mayo dropped out on the 10th lap and the third-starting Holmes of Munford, Ala., dropped out with power steering problems while running third on the 24th lap.

While Griffin stayed within a few lengths of the winner over the last 40 laps, Walker's scariest moment came as he and Mayo maneuvered through lapped traffic early in the race. Exiting turn two on the 10th lap, Walker got into the rear of the slower car of Andy Standridge. The collision left Mayo with nowhere to go and he got into the rear of Walker's car, dropping out with a car hampered the damage.

"They told us before the race to hold your line, so it wasn't really (Standridge's) fault I wouldn't say," Walker said. "But I didn't know Mayo had gotten into me .... it wasn't nothing but a racing thing. When the track gets like that, it's hard to get around lapped traffic. You just have to hold on and hope something gives."

Mayo saw a streak of three straight top-five Ice Bowl finishes come to an end. "I had nowhere to go," he said.

Walker suffered a little damage to the right front of his car's nosepiece, but it didn't slow him much. Along with Griffin, he repeatedly pulled away from the field and never faced a serious challenge. Griffin drew a bit closer in the final laps, but Walker lapped the slower car of Kyle Beard on the white-flag lap. Griffin lost momentum trying to duplicate the move and dropped back on the final lap.

"It's tough to race on a one-laned track when you've gotta a good car and you can't pass. ... then the lapped car got into us there and raced us pretty hard, and cost us three or four car lengths at the end of the race," Griffin said. "That's just the way it goes. You've just gotta keep digging and come back next time and do better.

"It's not too bad to start where we started ... it's just tough to pass in conditions like it was. You just have to capitalize on mistakes, and that kid didn't make a mistake, so it's kind of hard to do anything with him there."

Notes: Walker's Warrior Race Car has a Cornett Racing Engine and sponsorship from Brooks Construction, Pro Shocks and Performance Connection. ... The race was slowed by seven cautions, include three aborted starts that forced officials to start the race single file. Tim Roszell, Lamar Scoggins and John Ownbey were part of the first-lap yellows. ... The lap-10 yellow appeared for the slowing Billy Mayo. ... Lavon Sparks spun in turn four to draw a lap-20 caution. ... Sparks spun again in turn four four laps later as Stacy Holmes slowed on the track. ... Ownbey dropped out with a flat tire while running a distant third on the 36th lap. ... Fourteen drivers completed all 50 laps. ... Josh Watson earned a feature starting spot with a second-place finish in a consolation race, but he was light at the scales for the second time on the weekend (he was also light after time trials). That gave Kyle Beard a starting spot. Beard ran second most of the consolation race but was spun by Montana Dudley on the final lap. ... Tim Busha, who finished fifth, won the ensuing Crate Late Model feature for a $3,000 payday.