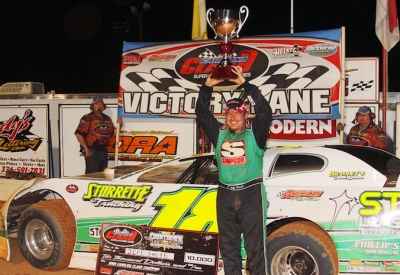 MADISON, N.C. (Oct. 24) — Dale McDowell's successful career has included many victories, highlights and championships, but he'd never won a Carolina Clash Super Late Model Series event. If winning a race on the 10-year-old series was on his list of things to do, the Rossville, Ga., driver can now cross it off after a dominating performance in Saturday night’s season finale on the tour. | Slideshow

McDowell, who has made relatively few Carolina Clash starts and none since early in 2008, started from the pole and led all 60 laps of the Clash Bash at 311 Fastrak to earn $10,000, the richest-ever payout in series history.

“Winning a race is huge no matter what track you’re at or what series you’re racing with,” said McDowell, who won two 2009 races on the Lucas Oil Late Model Dirt Series. “There were some good drivers here this weekend that know their way around this track. You don’t always come somewhere like this and win, but things went our way this weekend.”

While McDowell got the victory, the Carolina Clash got a new champion for the first time since 2004 as Jeff Smith of Dallas, N.C., unseated five-time champion Ricky Weeks of Rutherfordton, N.C. Smith, who had to finish 22nd or better to secure the title, posted a 16th-place finish. He started ninth and ran as high as fifth before dropping a cylinder late in the race.

McDowell pulled ahead of Mooresville, N.C., driver Larry Blankenship on the start of the race with third-starting Chris Ferguson, of Mount Holly, N.C., following close behind. Ferguson, who wrapped up Rookie of the Year honors on the series, stayed within a few lengths of McDowell as the frontrunners pulled away from the rest of the field early.

What was shaping up to be a good battle between McDowell and Ferguson ended on lap 15 when Ferguson dropped out of the race with mechanical problems. McDowell said after the race that he was worried Ferguson might have had a better car for the end.

“I’m pretty sure Ferguson went with a harder tire than we did, but he was still able to stay right there with me,” McDowell said. “We went a little soft on tires, and I think he made the better choice. I was definitely riding and trying to save my tires because I knew his weren’t going to go away. Then when he broke it gave me some breathing room.”

Weeks took over the second position, but he lost the spot to fifth-starting Jonathan Davenport on lap 18. McDowell built nearly a straightaway lead over Davenport until a lap-30 caution. McDowell pulled away on the restart, but the caution waved again two laps later.

Davenport moved to the high groove on the restart and was able to give McDowell his only serious challenge of the race. On five consecutive laps, Davenport closed to McDowell’s rear bumper in turn four, but lost ground each time in the turns one and two.

“I found the top groove was working and had a pretty good run going, but somehow my helmet shield had cracked and was fogging up,” said Davenport, the fast qualifier on the two-day weekend. “I had to run with the shield up and it was just so dusty that, after while, I couldn’t really see. I think we might have had a better car than McDowell, just never got to show it.”

Davenport looked under McDowell on lap 41, but a mistake the next lap allowed McDowell to open up a comfortable lead.

Davenport never made another run at McDowell. Even though three restarts, McDowell was able to pull away each time and cruised to the victory. Randle Chupp, of Troutman, N.C., finished third with Weeks fourth and Welcome, N.C., driver Austin Dillon fifth.

The weekend wasn’t all easy for McDowell. Because of Carolina Clash’s rules, McDowell was running a tire he’s not accustomed to and said it contributed to a poor qualifying effort. But McDowell rallied from his fourth starting position in his heat race and passed Davenport for the win to earn the pole for the feature.

“The tire situation kind of threw us off a bit on setup. And when you come in and run a series like this that you don’t normally run, it’s easy to get behind anyways,” McDowell said. “We didn’t qualify like we needed to, but we were able to make up for it in the heat race.”

On Saturday McDowell had another curveball come his way when mechanical issues caused him to miss hot laps. Normally it wouldn’t have been too big of a deal, but rain had soaked the speedway Saturday morning producing totally different track conditions from Friday night.

“When we messed up our hot laps it worried me a little. We had to kind of a make a wild guess for the race, but luckily we got the car pretty close and got the win,” he said.