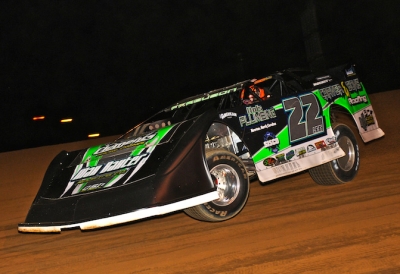 FAYETTEVILLE, N.C. (Oct. 3) — Chris Ferguson of Mount Holly, N.C., started outside the front row and led all 50 laps at Fayetteville Motor Speedway for his second Carolina Clash Super Late Model Series victory of the season. Ferguson earned $5,000 in the Countdown to the Cup event, part of the playoff-style finish to the series season. | Slideshow

"I was trying to drive in there straight and save the right rear (tire)," Ferguson said following his victory. "There's just a certain amount where you can't drive in there too slow or you'll get passed, and if you drive in too hard, burn (the right-rear tire) up even faster. I was hoping that race was going to get over faster than it did."

Dennis "Rambo" Franklin of Gaffney, S.C., was running fourth when his car's broken rear end forced him out, dropping him from second in the points chase down to fourth.