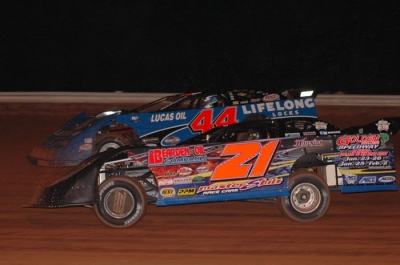 In the first race, Lloyd grabbed early lead, but Pearson moved ahead with an outside move and took control for a lead he'd never give up. Pearson maneuvered through lapped traffic on the 4/10-mile oval for complete his 20-lap victory over Lloyd and Billy Moyer. Casey Roberts, who finished fifth, locked up the SAS East title by virtue of simply starting the feature.

“I really appreciate what the Lloyds have done with this racetrack," Pearson said of track owner Frankie Lloyd and his family. "It is so much better for us and the fans. We are able to race on it now and that is just great.”

Pearson drew a six-car inversion for the second 20-lapper, putting Brandon Cameron and Roberts on the front row. Roberts took the early lead over Dennis Franklin, Cameron and Moyer, but Ivedent Lloyd was up to third two laps later. Lloyd then dropped Franklin to third, then tracked down Roberts to grab the lead just before the halfway point. He went on to win over Pearson and Roberts. Moyer dropped out with valvetrain problems. Matt Miller, piloting the Murrell Mixon-owned No. 7, got up to second but dropped out with three laps remaining.

"We have been having a lot of fun, but we wanted to win one of these things so bad," Lloyd said. "I am glad we got one here at our home track in front of our car owners. I need to thank Grady Lloyd for giving me such great equipment and J.B. Harris for all of his help."