Hall of Famer gets hometown victory at Batesville 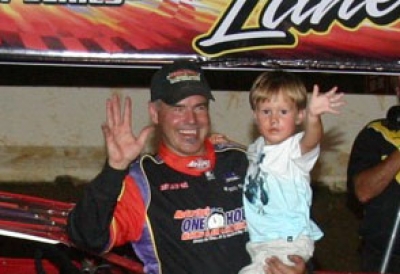 LOCUST GROVE, Ark. (July 25) — Getting a rare chance to race near home, long-traveling Hall of Famer Billy Moyer topped a pair of Springfield, Mo., teammates at his hometown Batesville Motor Speedway for a 35-lap victory. Moyer picked up $2,500 for the event co-sanctioned by the O'Reilly MARS DIRTcar Series and O'Reilly Mid-South Racing Association.

The 51-year-old Moyer took the lead from Jeremy Payne on the 12th lap and fended off a late charge from Terry Phillips to win by 1.5 seconds under threatening skies. Friday's winner Bill Frye of Greenbrier, Ark., who started 14th, was fourth and Brandon McCormick of Lebanon, Mo., rounded out the top five.

Payne started on the front row and took command early as Moyer joined him to build a three-second lead on third-running Will Vaught of Crane, Mo., after seven laps. Jon Mitchell of Nash, Texas, slowed exiting turn four to bring out the race's lone caution on the ninth lap, and Moyer turned the heat up on Payne on the restart.

Moyer took command three laps later for a lead he'd never give up while the eighth-starting Phillips had worked his way up to third. Phillips fought past Payne, his younger teammate, on the 18th lap and when Moyer was forced to deal with traffic, Phillips caught the leader and made things interesting.

Moyer got some breathing room late when the lapped car of Ray Moore broke the momentum of Phillips, and that was all Moyer needed to secure the victory.