Madden tops Davenport for $3,500 at Cleveland 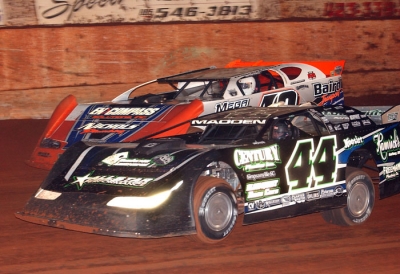 Davenport got the jump at the start and led the first three laps, but Madden drove past him with a low-side move exiting turn four the lead the fourth circuit and officially led the rest of the way. Madden edged ahead to lead comfortably through the first half of the 35-lapper, but high-groove running Davenport turned up the heat near the lap-20 mark, nearly overtaking him before a lap-26 caution broke up the battle. Madden faced less pressure the rest of the way in racing to his series-leading 13th career victory.

"He started coming on strong but those cautions let me cool my tires down, and I could hold my own from there," said Madden, who won his 10th victory overall in 2009. "He was giving it to me pretty good, but he raced me hard and clean. I don't know what happened on our car…I think I went too soft on the left rear tire. Once we cooled 'er off, the car went back to running pretty strong."

Davenport's runner-up finish paid $2,000 and helped him cut into the points lead of Tommy Kerr of Maryville, Tenn., who finished fifth and leads by 16 points with two series races remaining.

"Almost. ... again," Davenport said. "My car was bottoming out real bad and a couple times we got into the outside wall a little bit. The longer we ran the better we were getting, and that's because I think I was saving my tires a little more than he did. On that last restart (with five laps remaining), I'd already showed my hand too early running up high, and he never did come off the top again."

Eighth-starting Ivedent Lloyd Jr. of Ocala., Fla., rallied to finish third for his best career finish at the third-mile oval. Lloyd vaulted from fifth to third before the halfway mark, overtaking Jared Landers of Batesville, Ark., and Kerr. He stayed close to the leaders through the final stages in a Snow Bros. entry he drove at Cleveland for the first time.

"It's a different car and the best I've ever run here," Lloyd said. "This place has been a thorn in my side for a long time, so it's nice to get a good finish here. We always struggle at this track, but tonight we moved forward and passed some cars for a change."

The 37-minute race was slowed by six cautions, none for serious incidents.

Notes: Madden drives a Cornett-powered Bloomquist Race Car with sponsorship from Century Plastics, Cushman Paint & Body and Freeman Plumbing. ... None of the previous Southern Nationals winners at Cleveland (Clint Smith, Randy Weaver and Jimmy Owens) were in action. ... Don O'Neal of Martinsville, Ind., once again in the D&R Motorsports No. 53 normally driven by series promoter Ray Cook, but it mark O'Neal's final series start; he was 11th. ... Among drivers failing to make the feature: Dane Dacus, Kayne Hickman, Daniel Baggerly, Bobby Giffin, George Mashburn, Lee Sutton and Murphy, N.C., brothers Shawn and Johnny Chastain. ... Tommy Kerr takes his 16-point lead to Volunteer Speedway in Bulls Gap, Tenn., on Friday, the track where he won the 2008 Southern Nationals event. Volunteer and Tazewell (Tenn.) Speedway on Saturday wrap up the series with a pair of $5,300-to-win events.