Wall wins at Whynot after Baggett is penalized 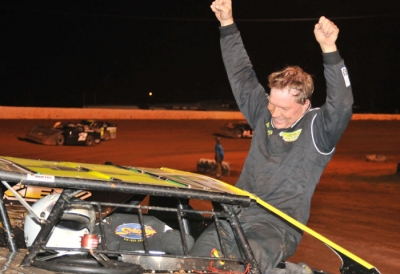 "We earned this one" said Wall, whose 12.922-second qualifying lap was a rare lap at Whynot under the 13-second mark.

Ninth-starting Neil Baggett of Shannon, Miss., pressured Wall through much of the race, but after a lengthy battle among the frontrunners in traffic, a lap-44 caution appeared and Baggett was black-flagged for climbing out of his car to dispute a ruling. Baggett had been ordered to restart on the tail after a tangle with a lapped car.

David Ashley of Zachary, La., moved up to finished second followed by hometown driver and series points leader Chad Thrash. McDuffie, who started outside the front row was fourth followed by Jason Cliburn of Star, Miss. Baggett was listed 15th in the final rundown.

Notes: Wall's MasterSbilt Race Car has a Wall 2 Wall Performance Engine and sponsorship from C&M Gator Farm, Gator Trax Boats and Stuckey Enterprises. ... Four of Wall's 30 MSCC victories have come at Whynot. ... Neil Baggett was penalized for breaking a sacred rule at Whynot in climbing from his car during a caution period (it's only allowed under red-flag conditions). The track rule harkens back to a race 15 years ago when the late John L. Cliett had both legs broken on the backstretch when he climbed out to check something on his car. ... MSCC competitors run July 24-25 at Greenville (Miss.) Speedway and Central Mississippi Speedway in Winona.