Marlar outruns McGuire for $5,000 at Butterball 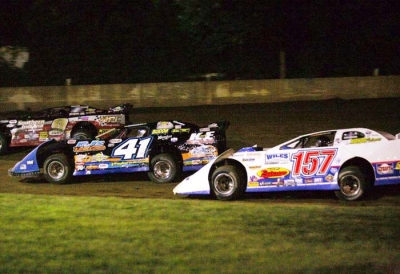 RICHMOND, Ky. (July 18) — Taking command after the final restart, Mike Marlar of Winfield, Tenn., led the final nine laps of the 22nd annual Butterball Wooldridge Memorial at Richmond Raceway for his third straight victory on the O'Reilly Battle of the Bluegrass DirtCar Series. Marlar earned $5,000 for his series-leading 17th career victory and fourth of 2009. | Slideshow

Jewell took the lead at the outset with McGuire, Neat, Webb and Marlar in pursuit, and Marlar quickly moved up to third after four laps. Lee's flat left-rear tire on the 12th lap bunched the field and erased Jewell's five-length lead.

McGuire raced past Jewell on the 21st lap to take command, just before two more cautions on lap 22 when Lee hit the turn-one guardrail and then a three-car tangle botched the restart.

McGuire led the field back into action for 18 straight green-flag laps with Marlar taking second from Jewell. McGuire and Marlar set a torrid pace up front, building nearly a full straightaway lead on Neat and Webb, who dropped Jewell back to fifth by the 32nd lap.

With the frontrunners working lapped traffic on lap 36, a caution for debris three laps later cleared the way for Marlar's final charge. Marlar made a high-side move exiting turn four to lead the 42nd leap and pulled away for the victory.