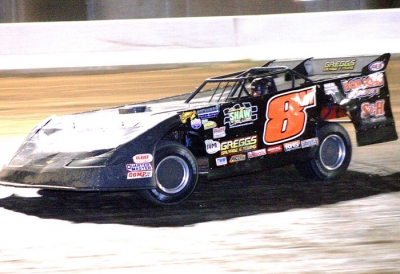 Murphree, a two-time modified champion at Batesville (Ark.) Motor Speedway, has moved primarily into the Late Model division as a rookie in a car backed by Meb Gregg of Jonesboro, Ark., and Hall of Fame chassis builder Larry Shaw of Batesville. Murphree's best previous MSRA finish was third on three occasions, including two months ago at Drew County. Murphree was a modified winner at the Monticello track in 2008.

Floyd, who started ninth, took second from series points leader Billy Moyer Jr. of Batesville on lap 13 before setting his sights on the leader. As Floyd closed the gap from seconds to just a few lengths, he ran out of laps in settling for the runner-up spot. Moyer finished third to increase his series lead to 39 from 18 points followed by Stacy Taylor of Jacksonville, Ark., and Dewaine Hottinger of Russellville, Ark.

Three cautions slowed the action. David Dunn of Russellville spun twice in turn two for two separate cautions and finished in 18th. Kyle Beard of Trumann, Ark., brought out a yellow for a turn-one spin on the second lap, and rallied to finish 10th, the same position where he started.