Hill leads all 35 laps at Wythe in SoNat'ls opener 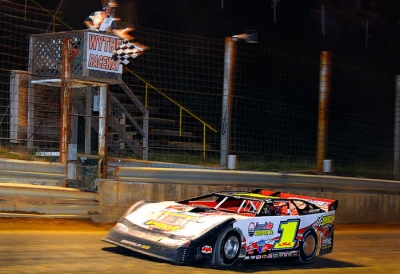 RURAL RETREAT, Va. (July 13) — Starting outside the front row, Vic Hill of Mosheim, Tenn., led all 35 laps Monday night at Wythe Raceway to capture the opener of the 10-race O'Reilly Southern Nationals. Hill got the jump on polesitter Don O'Neal of Martinsville, Ind., and collected the $3,500 payday for his first career series victory. | Video | Slideshow

"The car was really good tonight. It's been good all year," said Hill, who has eight victories overall in 2009. "This year, the slicker it gets, usually the better we've been doing. And it kind of blew off tonight and got slick and we qualified well."

A lap-28 caution flag gave second-running Tommy Kerr of Maryville, Tenn., a chance to peek under Hill in turns one and two on the final restart, but Hill raced away to the victory while Brandon Kinzer of Allen, Ky., dropped Kerr to third with a lap-32 pass. O'Neal, who lost two spots on lap-four restart, finished fourth followed by Chris Combs of Isom, Ky., giving eastern Kentucky two finishers among the top five.

"Vic just kept pulling and pulling away," said Kerr, who ran second most of the way. "We got in that lapped traffic and his car was so much better through the lapped traffic. It looked like he could just maneuver his car a lot smoother and easier."

Although he led comfortably most of the way, Hill wasn't letting up.

"One thing about racing at a track this size, you never really know how big of an advantage you have over guys you're racing with," the winner said. "So you'd just better go as hard as you can. Our car was strong, and we just kept getting better as the race went on. From what my crew just got through telling me, we were really turning fast laps even over the final five laps."

The race lasted about 21 minutes with three cautions slowing the action. A multicar scramble in turns one and two triggered the first yellow on the second lap, and another caution appeared on the fourth lap when Austin Dillon of Welcome, N.C., looped his car in turn two after contact with Rick Rogers (Dillon rallied to finish eighth). The final caution appeared with seven laps remaining when Tony Knowles slowed his smoking No. 26 machine.

Notes: Hill's GRT Race Car has a Vic Hill Racing Engine and sponsorship from Landair Transport, Pilot Travel Centers, American Racer Tires and Miller Bros. Coal. ... Hill was making just his third appearance at Wythe. ... Hill said he doesn't plan on running the entire Southern Nationals, but will likely run the four Tennessee events that wrap up the tour. ... Hill received a $100 bonus as the highest finishing GRT Race Car (Rocket Chassis and Barry Wright Race Cars pay similar bonuses; Tommy Kerr won Rocket's first bonus and Jonathan Davenport picked up Barry Wright's). ... Jeff Smith earned the $50 PPM Racing Products Hard Charger honors with his 17th-to-ninth run. ... The event drew 35 drivers from eight states. ... From being a racer himself, series promoter Ray Cook takes special care in making sure the full feature purse in the series is solid. In a sport where paying the last-place finisher 10 percent of the winner's share is rare, the $3,500-to-win purse on the tour pays 12.8 percent of the winner's share to the 24th finisher. ... Cook also isn't a fan of purses that pay the same for several positions (for instance, finishers 10-21 in the recent UMP DIRTcar Summernationals earn $500 apiece), so he staggers pay from 10th-24th from $540-$450 in $10 and then $5 increments, making sure each gained position is worth more. ... Drivers failing to make the Wythe feature: Larry Blankenship, Chris Ferguson, Shawn Beasley, Brian Nuttall Jr., Chad Ogle, Jeff Madden, Randy Harmon, Jeff Neubert, Travis Greer, Anthony Hill and Daniel Moss. ... Next up on the 10-race series is a $3,500-to-win event at Carolina Speedway near Gastonia, N.C., the first series appearance for the track.