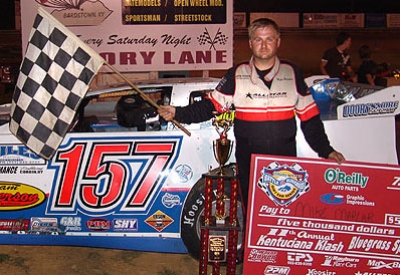 BARDSTOWN, Ky. (July 11) — Winning a duel with Eddie Carrier Jr., Mike Marlar of Winfield, Tenn., survived a late scrape with a lapped car on Saturday at Bluegrass Speedway to complete a weekend sweep in O'Reilly Battle of the Bluegrass DirtCar Series action. Marlar pocketed $5,000 for his victory in the 11th annual Kentuckiana Klash at the half-mile oval, his series-leading 16th of his career and third of 2009. | Slideshow

Carrier, of Salt Rock, W.Va., settled for second with Justin Rattliff of Campbellsville, Ky., in third. Brandon Kinzer of Allen, Ky., and 12th-starting David Webb of Nicholasville, Ky., rounded out the top five. Webb cut into the points lead of Victor Lee of Stanford, Ky., who was scheduled to start in the third row but pulled off with mechanical problems before the green flag waved.

Carrier took command early and Marlar quickly got up to second for what was a two-car race most of the race. After a lap-7 caution for an Eric Wells-Bobby Wolter Jr. tangle in turn one, the frontrunners pulled away to set a blister pace while Webb and Rattliff battled for third. Marlar dove under Carrier in turn four to get out front, but Carrier got back under Marlar to maintain the lead at the line on lap 18.

The frontrunners faced heavy traffic through the race's middle stages as they built nearly a half-track margin on the battle for third. Marlar pulled off a turn-two slide job to grab the lead on lap 33, but on the next lap, Jeff Watson slowed with mechanical problems on the frontstretch. Marlar got into the back of Watson's car, Carrier made contact, and Marlar's machine went spinning just past the flagstand. Officials ruled Watson was the blame for the caution and reset Marlar and Carrier up front. Marlar held off Carrier the rest of the way for a victory that followed Friday's win at Ponderosa Speedway in Junction City, Ky.