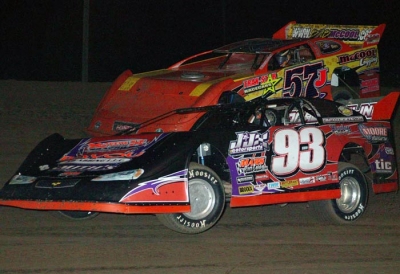 GREENVILLE, Miss. (July 2) — Pulling away after a late-race caution, Ray Moore of Shreveport, La., took the lead from Bub McCool of Vicksburg, Miss., to win a 40-lapper at Greenville Speedway, the first leg of the Firecracker Four Crown Series. Moore earned $2,000 in the unsanctioned 40-lap opener of a Fourth of July weekend trek across Mississippi.

"Lapped traffic worked to our advantage tonight," said the 27-year-old Moore, who waved to fans from victory lane. "If that late caution hadn't come out, Bub would have won it."

McCool was in control through most of the race as six cautions slowed the action. The battle up front heated up among slower cars with McCool and Moore swapping the lead between laps 28-30, with Moore barely beating McCool to the line when the seventh and final caution appeared on the 30th lap.

On the restarted with 10 laps remaining, Moore pulled away from McCool while maneuvering through lapped traffic and took the checkered flag three seconds ahead of McCool. Anthony Burroughs of Muscle Shoals, Ala., finished third followed by Chris Wall of Holden, La., a winner two weeks earlier at Greenville in Mississippi State Championship Challenge action.

Doug Showah of Indianola, Miss., leader in the track's weekly Late Model division, rallied from 12th to finish fifth. He was up to sixth after five laps, went to the back after a lap-24 spin, then gained 10 spots the rest of the way to round out the top five.

Thirteen of 22 starters were running at the checkered flag.

Notes: Moore's MasterSbilt from Mars has a Jay Dickens Racing Engine and sponsorship from Moore Wireline, J&J Motorsports, Bayou Swabbing, tic Tools International & X-Treme Graphics. .... The feature lasted 35 minutes with the checkered flag waving at 12:26 am. ... Five of the feature race's seven caution flags appeared for single-car spins or of a car sliding up over the backside of the track embankment. Dean Carpenter of Coldwater, Miss., and Jamie Elam of Senatobia, Miss., made contact and spun in turn two to bring out the first caution on the first lap. ... Local driver Chad Washington and Hall of Famer Jerry Inmon of Bruce, Miss., got together down the backstretch into turn three, ending Washington's race. ... Wayne Skinner of Stuttgart, Ark., started as an alternate, when Clay Fisher of Dewitt, Ark., had mechanical problems with his car; Skinner finished 13th. ... Chad Thrash of Collinsville, Miss., also had mechanical woes that kept him from qualifying or racing all evening. ... The Firecracker Four Crown Series continues along Highway 82 with a Friday race at Central Mississippi Speedway. Magnolia Motor Speedway just west of Columbus hosts Saturday's event and Columbus Speedway just east of Columbus hosts Sunday's finale.