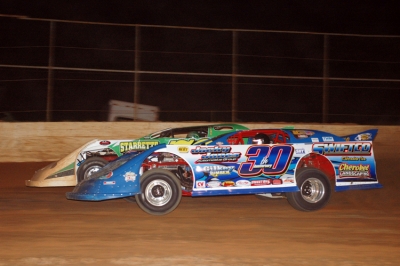 "What a race," Smith said in victory lane. "This place has really been good to me over the years and to win the biggest race in Carolina Clash history is really special. We had water pump issues qualifying and we got that fixed. We had a great car in the heat race and I knew we had a car capable of winning the 60-lapper."

Franklin, of Gaffney, S.C., settled for second with fast qualifier and series champion Ricky Weeks of Rutherfordton, N.C. in third, who rebounded from a mid-race flat tire. Brian Moody and Travis Pennington rounded out the top five in the 60-lap season finale.

As the green flag waved at the outset, Franklin jumped to the point over Brent Robinson. Jack Pennington quickly moved to the bottom of the speedway and slid into second as Robinson got loose in turn two. Ricky Weeks also slid by Robinson as the field completed lap one. Robinson's early race struggles continued one lap later when he spun in turn two collecting G.R. Smith. Both drivers went to the pits but were able to continue.

As the race went back green, Weeks quickly shot around Pennington as Smith began to turn up the heat on the outside. By the fifth lap, Smith had charged into the top five and was looking for more. On lap seven, he drove around Brian Moody for fourth, but Moody did not give up easy as he slid back under Smith two laps later.

Up front, Weeks was beginning to turn the heat up on Franklin as Smith went back around Moody on the next lap. Lap 12 saw Smith relegate Pennington back to fourth as Ray Tucker began to make his presence known. Tucker moved up to seventh on lap 13 and took sixth from Delaware's Austin Hubbard one lap later. The second caution of the event waved one lap later for Pennington, who slowed on the frontstretch.

On the restart, Smith jumped to the outside of Weeks as the duo raced down the backchute for second. The two then raced side-by-side for three laps before Smith finally made the move stick in turn four on lap 21 just before the third caution. While under caution, Weeks' right front tire went flat, sending him briefly to the pits.

On the restart, Smith immediately began to charge his way around the top of the speedway and challenge Franklin.

The most serious accident of the night happed on lap 26 as Junior Pearce and Scott Shirey got together exiting turn four. Pearce slammed the frontstretch wall and his car barrel-rolled before coming to a rest on the frontstretch. He wasn't injured, but the car was finished for the night.

Meanwhile, Weeks charged back into the top 10 by lap 32 while the leading Fraklin negotiated lapped traffic in the second half of the race. Weeks was up to sixth by lap 40.

On a restart with 20 laps remaining, Smith blasted to the outside of Franklin as the pair entered turn one. They raced door-to-door down the backstretch with Smith charging deep into turn three to take the lead. Smith began pulling away before the eighth and final caution waved on lap 53 setting up a seven lap shootout.

Franklin gave it his best shot, but Smith was too strong and closed out the victory.