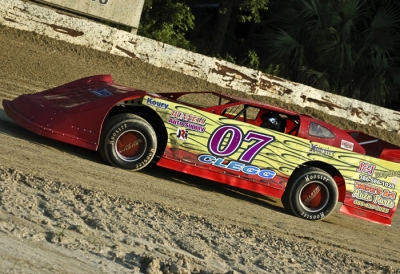 Mark Whitener of Middleburg, Fla., rallied from back in the pack after a flat tire to finish third ahead of Dillon Wood of New Smyrna Beach, Fla., and Adam Bedenbaugh of Lake City, Fla., in a race slowed by 10 cautions. Keith Nosbisch of Valrico, Fla., led early but ended up 19th.

Notes: The event drew a capacity crowd. ... The Powell Memorial began in 1996 to honor the family members of former track owner James Powell III; six members of the family were killed in a June 1995 plane crash. ... Next up for UDLMCS competitors is the $3,800-to-win Scott Thompson Memorial on June 27 at Volusia Speedway Park in Barberville, Fla.