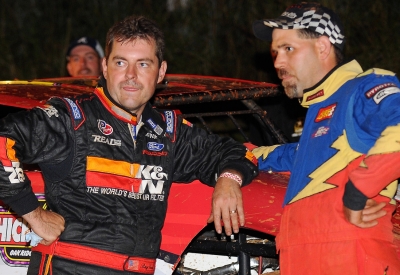 “I couldn’t help but think about that night a couple of years ago when I flipped my car in hot laps here and I have really wanted to get one of these wins here at my home track. This feels really good," Payne said. "I think Anthony scraped the wall down the backstretch and that’s all I needed to get by him."

Payne and White started on the front row and the outside position paid off for White as he took control to lead Payne, Cook, Kerr and Hickman from the outset. The race was plagued by 12 cautions with the longest green-flag stretch of 14 circuits as the top five held their spots.

It appeared White would race to his third career TTDCS victory in Brasstown, but a rare bobble in turn three allowing Payne to get by. He completed his victory by turning donuts in the infield mud preceding his victory lap.