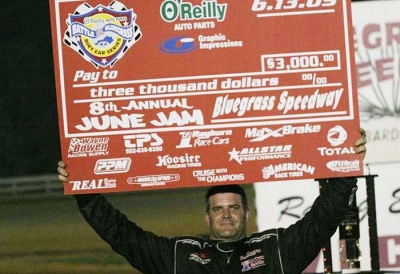 BARDSTOWN, Ky. (June 13) — Quickly heading to the front, 15th-starting David Webb of Nicholasville, Ky., took command of the eighth annual June Jam on a lap-12 restart and led the rest of Bluegrass Speedway's 30-lapper for his first O'Reilly Battle of the Bluegrass DirtCar Series victory since 2006. Webb earned $3,000 for his third career victory on the Kentucky-based tour.

Brad Neat of Dunnville, Ky., finished second followed by series points leader Victor Lee of Stanford, Ky. Mike Marlar of Winfield, Tenn., winner of five of the previous seven series events at the half-mile oval, was fourth with Jason Jameson of Lawrenceburg, Ind., rounding out the top five in a race slowed by six caution periods.

Dustin Neat, the runner-up's brother, led at the outset over Steve Francis, Lee and Jameson, but a lap-three caution for Michael Chilton's turn-two spin bunched the field. Neat and Francis edged away from the field on the restart while Webb was on the move, taking fifth from Jameson on the seventh lap.

The race's complexion changed on the 11th lap when Dustin Neat got sideways entering turn three, and Francis spun. Neat pulled out with a flat left-rear tire and Lee inherited the point for the restart. It took several minutes to get the race going again, however, with three consecutive cautions ruining restarts, including one incident that sent Johnny Wheeler and Terry English out of the race.

When the race finally got rolling again, Webb overtook Lee and led the 12th lap. He was still out front at a lap-17 caution for Jordan Bland's turn-four spin while Brad Neat had worked his way up to second.

With the last 13 laps clean and green, Webb earned a little breathing room with 10 laps to go. Neat stayed in touch with Webb through the late stages, but the leader maneuver through lapped traffic en route to the checkered flag.

Notes: Webb's C.J. Rayburn Race Car has a Pro Power engine and sponsorship from ORS Auto Body and Collision, Valvoline, Marine Works and Salyer’s Auto and Marine. ... Both Webb's previous series victories came at Lake Cumberland Speedway in Burnside, Ky. ... He's the fifth different series winner in 2009. ... Advancing 14 positions earned Webb the PPM Racing Products Hard Charger award. ... Steve Francis of Ashland, Ky., was piloting the Tim Logan Racing No. 11. ... With the cancellation of an event at Lake Cumberland, the series is going right back to Bluegrass Speedway for a $3,000-to-win event on June 20. An Aug. 15 series event at Lake Cumberland was also cancelled.