Smith wins at Hartwell after heartbreak for Weeks, Roberts 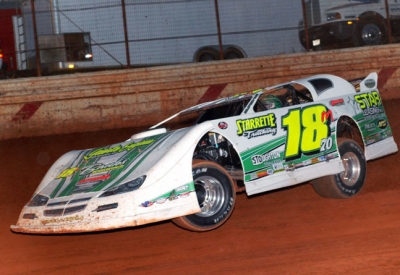 Jeff Smith gets up to speed at Hartwell before his Carolina Clash victory. (George "Big Mack" Missita)

HARTWELL, Ga. (April 25) — A top-three finish looked good to Jeff Smith of Dallas, N.C., with just a few laps remaining at Hartwell Speedway. But things turned out better than that as Smith ended up with a $4,000 Carolina Clash victory at the conclusion of the 50-lap Carolina Clash Super Late Model Series feature.

Smith's ascendance to the top spot was virtue of mechanical problems for five-time series champ Ricky Weeks of Rutherford, N.C., with two laps to go and the disqualification of apparent winner Casey Roberts of Toccoa, Ga., whose No. 101 was light at the scales.

The turn of events gave the sixth-starting Smith his 18th career series victory and first since the season-ender of the 2007 season. Chris Ferguson of Mount Holly, N.C., finished second at the 3/8-mile oval followed by Bruce Taylor of Toccoa, fast qualifier Ed Basey of Evans, Ga., and Brent Dixon of Elberton, Ga. Weeks, who overtook Roberts for the lead on the seventh lap and was out front until lap 48, ended up 17th.