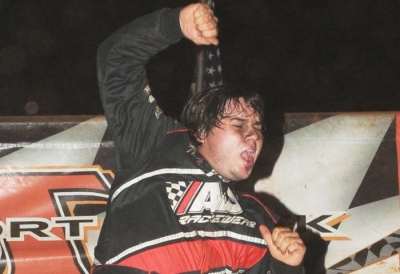 EASTABOGA, Ala. (April 25) — Fourth-starting Ronny Lee Hollingsworth of Northport, Ala., outdueled two-time series champion Chris Madden of Gray Court, S.C., at Talladega Short Track in a 50-lap battle among the points leaders on the O'Reilly Southern All Star Series for a $5,000 victory. | Slideshow | Video

“Man, you don’t know what this win means to me," said Hollingsworth, who celebrated in victory lane by climbing onto the door of his car and pumping his fists. "Winning here at this place is special for sure, but to outrun Chris Madden and the quality of this field is just awesome."

Madden, who leads Hollingsworth by six points in the series chase, settled for second after leading the first 19 laps with Dingus Griffin of Alexandria, Ala., moving up from his eighth starting spot to finish third. Billy Mayo of Cleveland, Tenn., who captured Friday's tuneup feature at TST, was fourth with Stacy Holmes of Munford, Ala., rounding out the top five at the third-mile oval across the highway from one of NASCAR's most famous superspeedways.

Madden jumped to the early lead with Hollingsworth quickly moving past reigning series champion Ivedent Lloyd Jr. of Ocala, Fla., and Brandon Kinzer of Allen, Ky., to get the second spot. Madden ran high with Hollingsworth low in the early stages as they battled side by side.

After a caution for James Cline, who clipped Jamie Perry's slowing car on the frontstretch, Kinzer tried to regain second from Hollingsworth. Hollingsworth rebuffed the challenge and moved higher on the racetrack in chasing Madden.

With the frontrunners working traffic, Madden waited for a side-by-side battle between Ted Lackey and Brandon McCallum to play out. Hollingsworth took the opportunity to grab the lead on the 20th lap while Madden was held up by McCallum, who spun in turn four the next lap to draw a yellow when Madden made contact sliding past.

Madden tried to regain the point on the restart, but Hollingsworth fought off his high-side charge. Hollingsworth got a little breathing room a few laps later, but a lap-31 caution bunched the field again.

Madden continued to work the high side while chasing Hollingsworth, but the leader edged away to win by four lengths at the checkered flag.

Notes: Hollingsworth’s MasterSbilt Race Car has a Jay Dickens-built Ford spec engine and sponsorship from Kelley Electrical Contracting, Tuscaloosa Chevrolet, Stuckey Enterprises, Xtreme Custom Graphics, Etheridge Race Parts, Allstar Performance, Ohlins Shocks, Joe Gibbs Performance Racing Oil, Braswell Carbs, Simpson, Phase II Sign Supply, Tiger Rear Ends, Cizmar, Racing Optics and Precision Rod and Customs. ... Hollingsworth started the season with the Baird Transport team but is back in his own equipment. "I can’t thank my dad and mom enough for everything and (chassis dealer) Ronnie Stuckey being here and helping us to get going," Hollingsworth said. "We had to work the bugs out of our stuff after it had been sitting for a few months, but I believe we are back where we needed to be.” .... Hollingsworth got his third career series victory; he won last year in Columbus, Miss., and Swainsboro, Ga. ... The checkered flag fell at 10:08 p.m. ... Four cautions slowed the feature. ... Todd Morrow of Oldfort, Tenn., rallied from 20th to seventh to earn the PPM Race Products Hard Charger honors. Morrow won the previous series event at Talladega last fall. ... The night's 49 Super Late Model teams represented 10 states. ... Fourth-place finisher Billy Mayo earned $2,000 the previous night for winning TST's unsanctioned Super Late Model feature. ... Dillon Crim was added as a track provisional as the highest driver in track points not transferring to the main event. ... Among drivers failing to make the feature lineup: Red Farmer, Jon Kirby, Tyler Reddick, Dewaine Hottinger, Mickey Trosclair, Mike Head, Randall Walker, Jake Knowles, Ricky Williams, Kenny Gaither, Ross Martin and Stacy Caldwell. ... Next up for O'Reilly SAS competitors is a $5,000-to-win event May 23 at Cleveland (Tenn.) Speedway (a May 9 race in Hartwell, Ga., was cancelled).

Correction: Updates with next series event in Cleveland, Tenn.