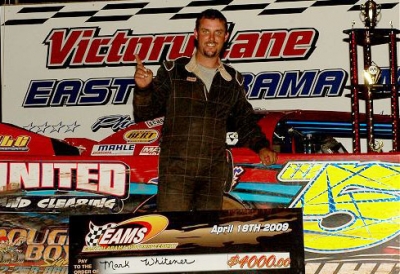 PHENIX CITY, Ala. (April 18) — Mark Whitener of Middleburg, Fla., fought off challenges from fourth-starting Travis Pennington of Winston, Ga., at East Alabama Motor Speedway for a 50-lap United Dirt Late Model Challenge Series victory in the second annual Alabama Clash. Whitener, who started outside the front row, earned $4,000 for his second series victory of the season and fourth of his career.

Pennington reached the second spot by the 11th lap and turned up the heat on Whitener, especially on restarts. But Pennington frequently had his hands full with third-running Keith Nosbisch of Valrico, Fla., taking the pressure off Whitener.

Pennington and Nosbisch made contact late in the race, and officials sent Nosbisch to the rear. He decided to retired because of a broken left-front rotor and pain from his hand after the steering wheel was knocked out of his hand by the contact. Later, Nosbisch's hand swelled to the size of a softball, but the extent of the injury hadn't been diagnosed.

Pennington, who won the previous night's UDLMCS event in Penton, Ala., tried every groove in chasing Whitener in the waning laps, but settled for second at the 3/8-mile oval. Hometown drivers Dewayne Johnson and Dana Eiland finished third and fourth while Johnny Collins of Jacksonville, Fla., a provisional starter using a backup car, rallied from 23rd to round out the top five.

The most serious slowdown of the event came on the 17th lap when a wheel off Clay Bedenbaugh's car knocked down a pit official; the official wasn't seriously injured.

Notes: Whitener's car is sponsored by United Land Clearing and Jayco. ... Eleven of 25 starters completed 50 laps. ... Jordy Nipper of Gray, Ga., was running in the top five, but car damage forced him out. ... Among drivers failing to make the feature lineup: Bobby Thomas, Jay Johnson and Chaz Haskins. ... Next up for UDLMCS competitors is a $3,000-to-win event on May 2 at North Florida Speedway in Lake City.