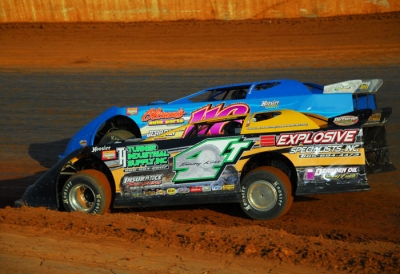 Weaver and Kerr were the class of the 26-car field, but Kerr's attempts to nose in on the winner fell short. Fourth-starting Scott Bloomquist of Mooresburg, Tenn., was third followed by Brandon Kinzer of Allen, Ky., and Vic Hill of Mosheim, Tenn. Billy Ogle Jr. of Knoxville, Tenn., rallied from 15th to seventh to earn hard charger honors at the historic 4/10-mile oval. Five cautions slowed the feature action.

Notes: Weaver's GRT Race Car has a Race Engine Design powerplant and sponsorship from Glenn’s Auto Parts, Byrd’s Radiator and PPM Racing Products. ... Weaver also won a 2007 O'Reilly Southern All Star event in Maryville. .... The feature event ran just over a half-hour and the checkered flag fell at 9:40 p.m. ... In the weekend clash of TTDCS and SRRS competitors at Wartburg Speedway and Maryville, the tracks joined for bonuses to the best performers. TTDCS regulars swept the bonuses with Anthony White earning $500, Billy Ogle Jr. earning $300 and Vic Hill picking up $200. ... Hall of Famer Scott Bloomquist made a rare series appearance and set fast time to start on the pole of the Sunoco Dash. But he slipped out of the groove on the first lap and finished fourth, costing him a front-row starting spot in the main event. ... Ben Kittrell of Mount Pleasant, Tenn., backed into the wall during hot laps and ruptured his car's fuel cell. ... Among other drivers failing to make the feature lineup: Doug Smith, Jimmy Tucker, Steve Smith and Weaver's teammate Mike Hill. ... Jimmy Owens of Newport, Tenn., was in the pits, but problems with the team's trailer door prevented him from unloading his No. 20. ... Next up for SRRS competitors is an April 24-25 weekend at North Alabama Speedway in Tuscumbia and Thunderhill Speedway in Summertown, Tenn. Both pay $3,000 to the winner. ... TTDCS competitors run next on May 8 at Crossville (Tenn.) Raceway in an event co-sanctioned by SRRS.