Madden leads all the way, earns $4,000 at Cherokee 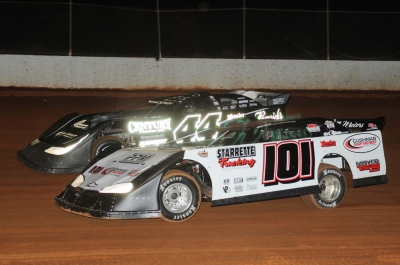 Chris Madden (44) got the jump on polesitter Casey Roberts (101). (carlsonracephotos.com)

GAFFNEY, S.C. (April 11) — Starting outside the front row, Chris Madden of Gray Court, S.C., led all 40 laps at Cherokee Speedway for a $4,000 victory on the O'Reilly Southern All Star East tour. Madden, dominant in series competition at Cherokee with nine of his 14 career series victories at the track, crossed the finish line ahead of Chris Ferguson of Mount Holly, N.C.

"I saw Ferguson down there beside me a couple of times so I think the fans got to see a good show," Madden said.

Jonathan Davenport of Blairsville, Ga., took a turn in the second spot before settling for third with hometown driver Dennis "Rambo" Franklin and Ricky Weeks of Rutherfordton, N.C., rounded out the top five at the 4/10-mile oval. Polesitter and fast qualifier Casey Roberts ran among the leaders the first half of the race, but he was knocked out on the 24th lap in a tangle with the slower car of Zach Cox.

Notes: Madden's Bloomquist Race Car has a Clements Racing Engine and sponsorship from Century Plastics, Cushman Paint & Body and Freeman Plumbing. ... Casey Roberts lowered the track record with his 14.813-second lap. ... Runner-up Chris Ferguson broke a rear end in time trials but was able to replace it before the feature event. ... About half the feature starters were running at the finish. Among the incidents causing cautions was a turn-two pileup involving Dale McDowell, Monk Gulledge, Billy Thompson, Furman Parton and Colby Cannon. ... Jonathan Davenport won the track's weekly Crate Late Model feature as part of the eight-division program. ... Next up for SAS East competitors is May 29-30 action in South Carolina at Union County Speedway and Cherokee.

Correction: Updates to fix next events.