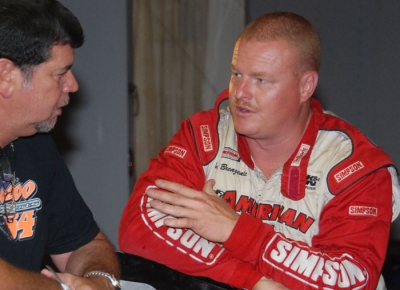 David Breazeale of Four Corners, Miss., has focused on racing in the Magnolia State most of his career, but he's branching out in 2009. The 32-year-old Dirt Late Model racer and the Louisiana-based Voodoo Motorsports team plan to run for Rookie of the Year honors on the Lucas Oil Late Model Dirt Series beginning Feb. 2 at East Bay Raceway Park in Gibsonton, Fla.

"Since we hired David to be our driver a few years ago, we have been prepping our program to become a national force," said team owner Jason Creel, whose Jay Dickens-powered Rocket Chassis is sponsored by Black Warrior Auction Co. "This past season we ventured to more national events as well as several tracks that we had never competed at before in preparation for running a major series like the Lucas Oil tour. We think that now is our time to hit the road and make some noise with Voodoo Motorsports."

Breazeale, who had five feature victories in 36 starts last season, is the third winningest in Mississippi State Championship Challenge history and was the series titlist in 2005. He also has four career victories on the O'Reilly Southern United Professional Racing tour. His richest career victory came in 2005 at Jackson (Miss.) Motor Speedway's with a $15,000 Fall Classic 100 victory in a Randy Thompson-owned car. — Ben Shelton

WEEKS EYES SIXTH TITLE AT BANQUET: While collecting a record $12,500 at the Jan. 10 series banquet, five-time Carolina Clash champion Ricky Weeks of Rutherfordton, N.C., wasn't afraid to take a peek at the 2009 season. "Next year, we will see if we have the fix for six," said Weeks, whose five series victories came in the last nine series events in 2008. "I have to thank my crew so much for their hard work," Weeks said, also thanking his wife Myra at the Concord, N.C., banquet. "Most of them have been with me since 1986 and I could not do it without them." Besides honors for Weeks and other drivers, the series inducted veteran announcer and public relations director Larry Long into the Carolina Clash Series Hall of Fame. The tentative 2009 Carolina Clash schedule opens March 14 at Carolina Speedway in Gastonia, N.C., and includes more than 20 races, including the return of the series to 311 Speedway in Madison, N.C., for the first time since 2005. The Oct. 24 season finale is scheduled to pay a record $10,000 to the winner, and will likely be held at either 311 Speedway or Fayetteville (N.C.) Motor Speedway. — From series and correspondent reports

MSCC OPENS SEASON AT SOUTH MISSISSIPPI: The Mississippi State Championship Challenge is scheduled to open the 2009 season with a two-race weekend at South Mississippi Speedway near Pass Christian, Miss., on March 6-7. Among other races on the 22-race schedule is the first-ever series visit to Northwest Florida Speedway in Blackman, Fla. (June 12 and Aug. 28). At the Jan. 11 series banquet in Florence, Miss., David Ashley of Zachary, La., was honored for capturing his second consecutive MSCC championship and Scott Creel of Franklinton, La., picked up Rookie of the Year honors. — Ben Shelton

SIX NEW TRACKS ON O'REILLY MSRA SCHEDULE: The tentative 24-race schedule for the O'Reilly Mid-South Racing Association includes events at six tracks new for the series, including West Plains (Mo.) Motor Speedway, Riverside International Speedway in West Memphis, Ark., and Drew County Speedway in Monticello, Ark. The series joins the O'Reilly MARS DIRTcar Series for several co-sanctioned events and also co-sanctions an April 11 event at Riverside with the Louisiana-based O'Reilly SUPR circuit. MSRA's season starts with an April 3-4 Arkansas weekend at 67 Speedway near Texarkana and I-30 Speedway in Little Rock. Series president Chris Ellis announced a few changes at the recent series banquet. The series is instituting a "Lucky Dog" rule that puts one driver a lap down back on the lead lap during a caution. Also, modifications to the point system give more points to the winner and also provide a five-point bonus for the driver leading the most laps. — Ben Shelton

ODDS AND ENDS: The O'Reilly Southern All Star banquet is scheduled for Jan. 24 at the Cleveland (Tenn.) County Club. Ivedent Lloyd Jr. of Ocala, Fla., will pick up his second consecutive championship trophy at the banquet shared with Cleveland Speedway, North Georgia Speedway and the Carl Black Top Tracks Challenge Series. ... The O'Reilly MARS DIRTcar Series schedule is tentatively set to open March 13-14 at Clarksville (Tenn.) Speedway. Among other races are at Outlaw Motor Speedway near Muskogee, Okla. (April 24), Batesville (Ark.) Motor Speedway (July 24-25) and a two-race weekend at Tri-City Speedway in Granite City, Ill., and Lake Ozark Speedway in Eldon, Mo. (Aug. 7-8). ... The Kingstown, N.C.-based Beaver Motorsports/Lowe Racing team has named Petey Ivey of Union, S.C., to replace Jonathan Davenport in the team's No. 75 for 2009. The Beaver Bail Bonds-sponsored car, with Robert Bramlett serving as crew chief, is scheduled to compete at select Carolina Clash, Southern All Star and World of Outlaws Late Model Series events.