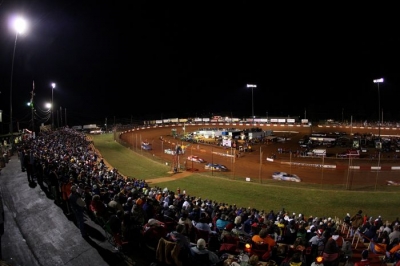 The stands were nearly full at Dixie. (Dixie Speedway)

WOODSTOCK, Ga. (Oct. 25) — At Dixie Speedway's Bill Elliott 50, there were three big winners: Shane Clanton of Locust Grove, Ga., with a $5,000 victory in the Super Late Model feature, Ken Schrader of Fenton, Mo., in the NASCAR exhibition Red Dirt Dash — and Children's Healthcare of Atlanta, which received some of the proceeds from the special event. | Slideshow

A near-capacity crowd relived old times for a few hours on a cool Saturday evening as local hero Bill Elliott and a collection of his NASCAR racing friends ran a special celebrity race for charity at the inaugural event.

"I’ve very proud of being able to give back to local racetracks and raise money for local charities," said Elliott, a former NASCAR champion who won his first race at Dixie Speedway in 1974. "I know the economy is bad and things are tough, so to be able to put on a good show, draw a great Dixie crowd and raise money for Children’s Healthcare of Atlanta makes this event all the more special."

In the 50-lap Super Late Model event, Chris Madden of Gray Court, S.C., took command at the start and held the lead for the first 20 laps until Clanton overtook him with an outside pass following a restart. Clanton took a commanding lead and was never challenged for remainder of race. Dale McDowell of Rossville, Ga., finished second followed by Madden, Clint Smith of Senoia, Ga., and Ray Cook of Brasstown, N.C.

"I had to get out front since clean air means so much here to put the nose into turns three and four," said Clanton, who won his third race in his last four starts. "I’m glad to be the first (Bill Elliott 50) winner. It feels pretty cool."

The 25-lap Super Late Model celebrity race featured a two-stage format in which the field was inverted for the final 15 laps. Dave Blaney qualified fastest of the seven NASCAR visitors and started on the pole followed by Tony Stewart, Ken Schrader, David Gilliland, Bill Elliott, Kasey Kahne, and Ray Evernham.

The start of the first segment saw Blaney take the lead, but the dirt track specialist was quickly passed by Stewart, who went on to win the first segment. With the field inverted, Schrader assumed the pole while Stewart moved to the rear of field. With the restart, Schrader took a commanding lead as the rest of the field jockeyed for position behind him. An excited crowd watched as Stewart and Blaney quickly worked their way from the rear in an effort to catch Schrader. But neither had enough laps to close the gap, finishing second and third behind Schrader, who drove a Clint Smith-owned car.

"I hit the kill switch by mistake," said Schrader about the yellow caution he initiated near the end of the first 10-lap stage, thus enabling him to start on pole for the final stage. "I was able to get away from them a little bit toward the end. Getting away from someone and passing them are two different things." David Gilliland, Kasey Kahne, Bill Elliott, and Ray Evernham completed the final four spots.