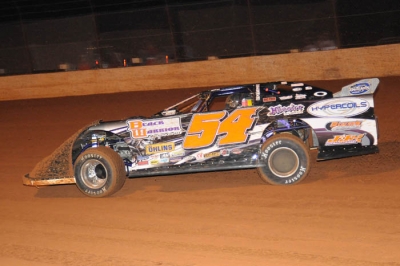 MERIDIAN, Miss. (Oct. 11) — Polesitter David Breazeale of Four Corners, Miss., took command early and fought off all challengers at Whynot Motorsports Park to win the finale on the Mississippi State Championship Challenge. Breazeale earned $2,500 for his third series victory of 2008 and his second in the final three series events.

Fourth-starting David Ashley of Zachary, La., settled for second at Whynot, but that finish was good enough to guarantee Ashley his second consecutive MSCC championship. Ashley ran side-by-side for the lead with Breazeale on laps five and six, but that was as close as he'd get as he fell back before getting back to second at the finish.

Hometown drivers Chad Thrash and Jim McDuffie, who rallied from his 14th starting spot, were third and fourth while Scott Slay of Clinton, Miss., ran as high as second before rounding out the top five. Fast qualifier Chris Ragan of Ramer, Tenn., took second from Ashley on the 16th lap and battled up front with Breazeale, but mechanical problems forced Ragan out on the 33rd lap.