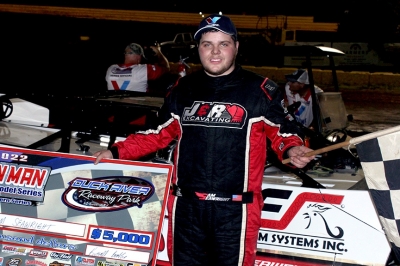 “I really wanted to win this one for my dad. He’s been really sick,” said Seawright. “I can’t talk about it. I’ll get teared up.”

Debuting a brand new Rocket Chassis that just a few days earlier he didn’t even plan to race, Seawright’s determination paid off. He set the second quickest mark during time trials, started from the outside front row and led every lap of the feature. Following the postrace celebration, when he managed to gather himself, Seawright stood inside his hauler and talked — with pleasure — about his 69-year-old father Don Seawright, who was still in a Rome, Ga., hospital.

“Well he had back surgery back at the start of the year and he’s been really sick ever since then and he got a PICC line (peripherally inserted central catheter) put in his arm and he’s just been really sick,” Seawright said. “When they took the PICC line back out he really went downhill, like the day after. He got sick and was shaking and throwing up and I mean he was just like really sick, so we took him to the local hospital. This was Tuesday. So they transferred him to Rome from Fort Payne and he was in ICU in Rome, really, really sick and that’s where I’ve been all week was down there with him.

“I really wouldn’t had no intentions of racing. So they started running the whatever medicine they use to get … he got septic and they cleared all that up and he’s doing a lot better now. He’s in a regular room, but it’s been hard on us all week because I mean, there’s a lot of emotions when your dad’s in the hospital like that. So we all have been really upset, but he wanted us to come race so we come race and I’m glad I can win that for him ’cause there’s nothing I wanted more than to win that for him.”

With the uncertainty of his father’s health, Seawright said he didn’t plan on making the trip to Duck River. He and his brothers — he has five, including fellow racer J.T. — didn’t have time to prepare the team’s new car during the week. But when their father was taken out of ICU, they scrambled to finish things.

“We didn’t get the seat mounted until (Thursday), because, like I said, I had zero intentions of racing until this morning and dad got better and they moved him to a regular room. He’s doing good right now. He’s on Cloud Nine. He gets happier than I do when I win. That’s the best part for me is just seeing how happy he gets. He loves it. Me and him’s best friends and we’re always together and he loves it more than I do to be honest.”