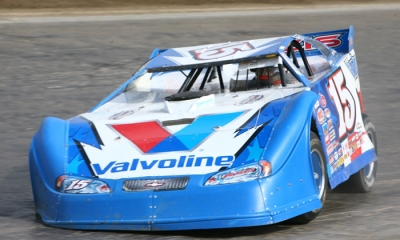 ROSSBURG, Ohio (Sept. 9) — You've heard it a million times from drivers rallying from mid-pack or further in 100-lappers at Eldora Speedway: "We used up our car getting to the front."

Jimmy Owens of Newport, Tenn., had that concern starting in the seventh row of the 37th annual World 100 in a rain-postponed Sunday afternoon event, but he took care of that in one fell swoop. The fast qualifier wasn't running mid-pack of the 28-car field but for a few seconds as he exploded at the sight of the green flag, picking his way to the front in the low groove. When he went by the flagstand on the second lap, Owens had raced from 13th to third and held the position when a caution appeared a lap later.

"A lot of times I'll get a little mixed up and you don't realize where you're at until the caution comes out," Owens said. "And I was like, 'Holy crap, I'm third.'

"We just found the groove on the bottom really early, and that made us get up in position to put ourselves in the lead. After a few laps, we pressured Scott (Bloomquist) and got by him and kept our head about us."

Although 10th-starting Steve Francis overtook Owens on the 18th lap and led the bulk of the race, Owens was able to keep his car in position for the final charge that saw him lead the final 14 laps of Dirt Late Model racing's most prestigious event.

"Our crew and everybody, we just had a ball this weekend and our hats are off to Eldora Speedway for sticking it with and getting the show in today," said Owens, who enjoys his team's easy-going nature. "(Car owner) Mike Reece and all my sponsors are such a big help because they're like, 'Just go out and have a good time.' You know, when you think of it as racing for living, then you're pressured and it makes it hard to make good decisions out on the track if you think, 'I've gotta win this race to pay the bills.' That's not good." — Todd Turner

Track holds up despite daytime racing

Dedicated fans who sat in Eldora's grandstands during Saturday night's never-ending drizzle probably figured their chances of seeing an exciting race might be going down the drain along with the muddy water throughout the pits. The prospect of a Sunday afternoon race in all likelihood meant a dry, sun-baked track that wouldn't allow much passing after a strip of rubber was laid down.

Instead, the postponed racing was not only good compared to daytime races, it rivaled some of the best racing Eldora offers as four of the top five finishers started in the fifth row or further back. Lap times usually pick up in the daytime, but slick conditions prevailed and kept lap times nearly four seconds slower than the times turned in Friday's time trials.

"I cannot believe this racetrack never picked up a rubber streak at all," runner-up Steve Francis said. "Lap times were 20.50s, the slowest World 100 as far as track condition in probably 10 years or longer."

Why didn't a rubber strip develop?

"Good dirt is the only thing I can say," Francis continued. "Maybe because it had so much moisture down in it, you know, and this is all new dirt, and from all the rain that we had and everything. … This thing was unbelievable all day."

Francis and Owens were the class of the field on the slick daytime surface, but Francis wasn't able to match his counterpart, who rode a mid-summer hot streak to Eldora's victory lane.

"When you've got things going your way, they're going your way. There ain't nothing you can do wrong it seems like," Francis said. "He and his guys did a good job, there's no doubt about it." — Todd Turner

Wayne Chinn wasn't simply satisfied with making his first start in the World 100. The driver from nearby Bradford, Ohio, turned in the most impressive performance of his three-year Late Model career with a fourth-place finish. That's the best showing by a first-time World 100 starter since Dan Schlieper finished third in 1998.

Chinn, who switched to a 2004 Rayburn Race Car three weeks earlier, said he didn't touch the car's suspension after hot laps and it performed flawlessly all weekend long.

"It took four or five laps for the tires to really fire, then once they did, the car took off," said Chinn, who started third and never dropped out of the top five. "I was real happy with it. I just had to stay smooth and keep it straight myself. Once we did that, it was just a matter of picking off laps and trying to pick up time.

"I was looking for a yellow at the end. At the end it was getting better. The lapped cars take time here, too, because everybody's so fast. So when you make up time, you make up a couple of feet, you don't make up car lengths here."

"It's exciting. It just makes you want to come back," the 26-year-old Chinn said. "I'm looking forward to next year already. We've just gotta keep plugging away. We just keep making the team more and more solid."

Frank's award-winning car gets bent up

Chub Frank of Bear Lake, Pa., got plenty of attention during the rain-plagued weekend — his special green Chubzilla graphics package helped earn him the Best Appearing Car & Crew Award — but the 2004 World 100 winner didn't put the car on display in the 100-lapper.

The 45-year-old made a stirring charge from the eighth starting spot to third place in the second heat race, but a caution flag on the last lap of the 15-lap event proved to be disastrous for him. He clobbered the turn-one wall on the restart and was hit hard by Doug Drown, inflicting heavy front and rear end damage to his machine and ending his day. — Kevin Kovac

When top-flight drivers miss the 120-car cutoff for heat races, many of them load up and scrap the weekend. But Scott James of Lawrenceburg, Ind., who has a pair of top-fives to his credit in 100-lappers at Eldora, stuck around until the wee hours of Saturday morning to win a non-qualifiers' race.

When action resumed on Sunday, he joined a line of alternates and got a spot in the first hear race. He improved enough to earn a spot in a consolation race, where he stormed into contention but fell one position short of transferring to the main event, something he vowed to give his best shot.

He kept his head up after failing to earn his third starting appointment in the World 100. "If you're ever faced with adversity," James said, "don't ever give up." — Todd Turner

Richards rides it out after early spin

Josh Richards of Shinnston, W.Va., had to run a consolation race after a lackluster heat-race effort, but after moving from the 10th starting spot to a fourth-place finish he was in the World 100 for the third straight year.

The 19-year-old rocketed out of the gate in the main event, hustling from the 27th starting position into the top 20 in just three laps. But then he spun between turns one and two and was collected by another car, effectively ending his hopes of duplicating a fourth-place finish in the 2006 event.

“We had a real good car, but I got in just a little too deep beside another car and the car just got loose and I spun out,” said Richards, who finished 19th. “I got hit in the right-front, and it bent the suspension. I came in and they tried to fix it, but it was bent and after that I just couldn’t steer. I was also running on seven cylinders because we broke a rocker arm, so I was pretty much just riding around.” — Kevin Kovac

The slowest of 203 qualifiers to make the main event was Donnie Moran, who was 50th fastest. The four-time World 100 winner rallied from his ninth starting spot in a heat race to finish second and earn a transfer position. ... Brian Birkhofer, the 2002 race winner, dropped out with a 26th-place finish but added to his current streak of six consecutive World 100 starters, the most of any driver. ...ï¿½ Moran made his 19th career World 100 start to match Freddy Smith's record. Billy Moyer, who has 18 starts, missed the starting field while Scott Bloomquist made his 18th start. — Todd Turner