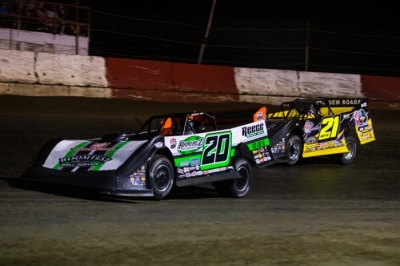 BATESVILLE, Ark. (Aug. 22) — Billy Moyer was close. He knew it. His hometown fans at Batesville Motor Speedway could feel it, too.

As Moyer moved from 18th into the top five midway through Saturday’s 28th annual Topless 100, there was a buzz in the air. Could Moyer, the 62-year-old Hall of Famer flirting with retirement get another crown jewel victory — at his home track of all places? | Complete Topless 100 coverage

As he moved by Earl Pearson Jr. of Jacksonville, Fla., following a late restart and tracked down leader Jimmy Owens of Newport, Tenn., in the waning laps of the $40,000-to-win race, victory was within reach. Moyer caught Owens with two laps remaining, got a good run down the front straightaway as they took the white flag and nosed ahead as they exited turn two.

The record crowd rose to its feet as Moyer swept to the outside of Owens and the slower car of Tyler Bruening.

But as quickly as spectators rose in anticipation, they collectively let out a gasp — then a groan.

Moyer’s Capital Race Car, which had been flawless throughout the feature, pushed up the track and into the backstretch wall, allowing Owens to dart away for his third Topless 100 victory and 10th Lucas Oil Late Model Dirt Series win of the season. Moyer ended up fourth as both Pearson and Tim McCreadie of Watertown, N.Y., flashed by while he worked to regroup.

“I was working him there for the last 15 laps or whatever. When you’re leading like that … he was kinda protecting the bottom there and it was kinda rubbered up a little bit, but you know, I could run my left side (tires) through it,” said Moyer while talking to DirtonDirt.com pit reporter Ben Shelton at his hauler in the Batesville pit area. “(I had) a real good car there. Really I was getting a little tight the last 10 laps or whatever and I was having to drive a little more crooked and I knew in the back of my mind the tire issues that we have here. We talked about that today, didn’t think we’d make it without stopping somehow.

“So I couldn’t drive it real aggressive trying to keep the tires under me. I kept working him and working him and I was watching the lap board. I like racing at these tracks that’s got lap boards. The white flag there … just that lap there everything happened just right kinda down the front straightaway where I got a good run on the outside of him and I just give it all there the last lap. You know I had him cleared and the 16 (Bruening) was there. I had him cleared.”

Moyer stopped, shaking his head about what could have been — fourth place paid $5,000 compared to the $40,000 Owens earned for winning or the $20,000 Pearson received for second place — then continued.

“I should have just lifted and followed (Bruening) but I was gonna try to get around the outside of (Bruening), too,” he explained. “But I figured if I got in behind (Bruening) he’d block me down the back straightaway and Jimmy would get underneath me probably and then the last lap going into turn three it wasn’t going to be pretty for me … I don’t think. We all try to race fair, but when you’re going for 40 grand in a deal like that … anyway.

"If I would’ve just lifted and not got to aggressive on (Bruening) … I don’t know, maybe I got excited there. I about did that a couple laps earlier, or a couple times through the race. Anyway, I should have just backed up a little bit. I still might have won or still would have run second instead of fourth you know.”

Moyer spoke in measured sentences with a hint of excitement in his tone followed by moments of disappointment. His rally, however, left the partisan Batesville crowd pumped up.

“It would have been nice for him to win, especially from where he started,” said Rodney Cossey of Cabot, Ark.

Even competitors were rooting Moyer on during those final frenetic laps.

“I think this place goes nuts if he gets by (Owens),” said driver David Payne of Cabot, Ark. “We were watching from the hill and the whole hill was going crazy. I think if the old man would’ve won or maybe (Tyler Erb), with everything he’s gone through lately … either one of them, the place would’ve gone nuts. I would have liked to have seen the old man win another one. There’d still be 5,000 people here if he’d won.”

Derrick Sorensen, a Midwesterner who now works with driver Drew Armstrong in Alexander, Ark., said Moyer made another statement for the G.O.A.T. (greatest of all time) debate.

“There’s something to write about,” quipped Sorenson. “That would have been pretty special to see him win.”

Long after the Batesville Motor Speedway lights had dimmed, social media was still abuzz too.

“Old man Moyer had the entire grandstands on its feet on the last lap. Even though the stats show the guy that started on the pole won the racing was awesome through the field,” Zach Jenkins of Olive Branch, Miss., wrote in a Facebook reply to Shelton.

Though it was a near-miss, the dazzling run seemed to energize Moyer, who spoke at length with Shelton afterwards. He added however that it wasn’t quite enough to postpone the inevitable.

“When you run good, you want to race forever. When you run bad, you want to get out of it the next day,” Moyer said. “We’re not gonna give up. We’re gonna keep swinging. But as far as there retirement part, I think it’s still here. Enough’s enough. For me at 62 against these kids that’s 25 or 35, there’s a big difference in what I gotta go through to try to … when I was young I never worried about what I ate much and never had to worry about working out. You know I work out a little bit, but not nothing like … you know today, in today’s world.

“Through the winter time I try to (exercise some) where my head don’t fall off my shoulders. I gotta eat quite a few Tylenol. My ol’ neck and shoulders hurt. I don’t know how Steve Kinser does it in that sprint car with your neck you know. Your neck and shoulders on these things is probably the worst part for me. And I know it every morning when I wake up.”