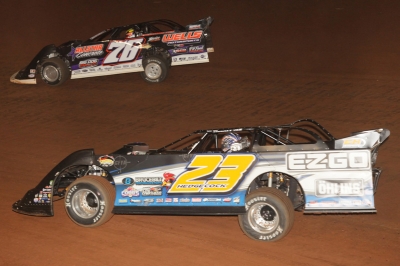 CROSSVILLE, Tenn. (July 23) — Cory Hedgecock picked up right where he left off: on the podium in Schaeffer’s Southern Nationals Series action. The 27-year-old Loudon, Tenn., native is the only driver who has managed to win a Southern Nationals feature this season other than Brandon Overton of Evans, Ga., and Chris Madden of Gray Court, S.C. | Complete Southern Nationals coverage

While he has a pair of middling finishes — 15th after a suspension part failure at Wythe Raceway in Rural Retreat, Va., and ninth in his second-ever visit to Senoia (Ga.) Raceway — Hedgecock has been nothing less than superb in his other four series starts this season. Along with his July 14 victory at I-75 Raceway in Sweetwater, Tenn., Hedgecock has three third-place finishes, including Thursday at Crossville Speedway.

It’s the continuation of a dandy season for Hedgecock, who has continued to enter more Super Late Model events this year and fewer Limited and Crate Late Model races that have been his bread and butter in recent seasons. Among Hedgecock’s 18 top-five finishes this season across three Late Model divisions, he has 16 podiums. That includes six victories and six runner-up finishes. During a seven-race stretch from May 14-29, Hedgecock won twice while never finishing worse than second.

While Hedgecock is still splitting his time among all three Late Model divisions, the results he’s recorded in the sport’s upper echelon have been impressive this season. In six events with the two national tours, Hedgecock has five top-10 finishes, including a best of second in the June 26 Lucas Oil Late Model Dirt Series race at 411 Motor Speedway on June 26.

“Andy Savary, the statistics guy with DirtonDirt on Twitter and everything, made a really cool comment about how well we’ve done on the national touring series and everything and how it’s just a little bit overlooked,” said Hedgecock. “I think we’re a little overlooked, but we’re getting there. Throw (Brandon) Overton and (Chris) Madden out and I’ve won probably five races in this series now, so those two guys are way above me by far and they definitely deserve to be there.”

When Hedgecock decided to drop of the Southern Nationals Series following his ninth-place finish at Senoia, he sat third in series points behind Overton and Madden.

“We just got a little bit of tickling to do. We’re not that far off,” said Hedgecock. “I think we’re one of the closest running with those guys around here, so we’ll tickle a little bit more and we’ll go to 411 (Friday), which I definitely do know how to get around. As long as the draw goes good and I make a good lap in qualifying, like I said in that interview after the race, if you put me on the front row of a heat I think I can handle it from there. I just need to start in the top five or six there (Friday) and I think we can get it done.”

Hedgecock’s 411 results this season speak for themselves. His only other Southern Nationals victory came at 411 in 2018, and in four events at his home track this season he has two wins and two runner-up finishes. He won a $2,000 Crate Late Model race as well as the $10,052 Schaeffer’s Iron-Man-sanctioned Scott Sexton Memorial, while he finished second in the $5,000-to-win Spring Sizzler — an unsanctioned Super Late Model event — and June’s Lucas Oil Series race.

With such lucrative events in East Tennessee, Hedgecock said he hardly needs to venture far from home.

“I think it’s still one of the hardest places to win in a Late Model is East Tennessee with just everybody that runs here and comes here as far as with all the touring series and there’s just so many racetracks around here that are within max two hours of my house where we just don’t have to travel no more,” he said.

“I don’t necessarily want to do a national deal. I mean, I’d love to, but work-wise I’d never be able to do it or afford it. So what we’ve got to offer here and what we’re presented with as far as with the racetracks and such, we’re definitely happy with where we are, and if I can just maintain around here and win some races every year and keep funding the whole operation, then that’s what we’ll do.”

Hedgecock certainly wouldn’t rule out traveling farther from home — he’d have liked to have seen how he would have fared on the tour’s swing through Georgia — but he knows a lot would have to change with his racing program to make that a reality. There's his family business, Eagle Race Engines, where he works with his father eats up most of his time. Then there’s the general lack of help around the race shop.

“If we were down there more so or had someone working on the regular maintenance while me and dad were down there just trying to get faster rather than just trying to get back to the racetrack, I think it would show a little bit. It’s really what you see is what you get. It’s just me and my dad and my grandad sometimes, and if my grandad don’t come, it’s Jerry that comes.”

For now at least, Hedgecock said the priority is the engine business, which on one hand allows him to race competitively, while on the other hand keeps him close to his native Tennessee.

“Good help is really hard to find anymore. If you find help, they’re lazy,” Hedgecock said. “It’s just impossible to find anybody anymore, so one day we’ll find somebody, and whenever we do, we’ll hold onto them and hopefully be able to last five or six years. I know it’s not necessarily a lifetime deal for somebody.

“I don’t think you could race for a living and do it the correct way, because I think at the end of the day you won’t have anything, the majority of the people won’t. So ultimately, we’ve gotta focus on Eagle and what it allows us to do in the racing is just what will happen.”

"Throw (Brandon) Overton and (Chris) Madden out and I’ve won probably five races in this series now, so those two guys are way above me by far and they definitely deserve to be there."