Hometowner on track with Needmore podium 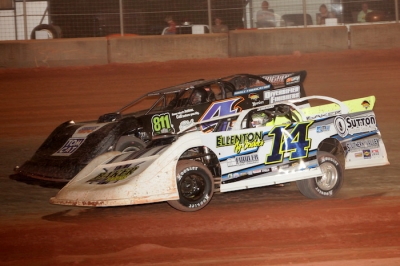 After a rough start to the 12-race Southern Nationals tour, the Super Late Model rookie and his team were in dire need of a pick-me-up. Baker was confident that a trip to his hometown track would do just the trick. | Complete Southern Nationals coverage

Starting from the ninth position, the 24-year-old Baker rallied into the top five midway through the 53-lap race and battled for second in the closing laps before ultimately settling for a third-place finish, his best performance in a Super Late Model to date.

“I’ve struggled this week with these guys, but I just knew we could come here and get us a good run,” said Baker, whose family-owned team races in partnership with veteran Florida racer Mark Whitener. “We definitely needed it. Not just for me, but really for my crew and the people who support me. I feel like I’ve been letting them down.

“I’m just so proud of this top-three finish for these guys. It’s great looking around this pit and seeing everyone so happy. We really needed this.”

Things started out promising enough when Baker opened the tour with an 11th-place finish at Smoky Mountain Speedway in Maryville, Tenn. But with his teammate Whitener suffering engine issues at Smoky Mountain, Baker stepped aside to allow Whitener to run his car in the tour’s next event at Wythe Raceway in Rural Retreat, Va.

Baker returned to the driver’s seat Monday at Volunteer Speedway in Bulls Gap, Tenn., where he finished a lap down in 15th. The team then skipped Tuesday’s race at I-75 Speedway in Sweetwater, Tenn., to have an extra day to regroup in an effort to make the most of the tour’s four-race Georgia swing.

But Baker’s home-state stand met an immediate obstacle when he suffered engine problems of his own in hot laps for Thursday’s race at Senoia Raceway. With no spare engine, Baker was looking at potentially missing Friday’s race at Needmore.

Fortunately, engine builder Vic Hill offered to loan the team an engine, and Baker made the long overnight drive from Senoia to Hill’s shop in Mosheim, Tenn., and back to south Georgia just in time to get the engine in his car and make it to Needmore.

“It’s really been a crazy week for us with everything that’s happened,” Baker said. “We’ve had motor trouble and suspension trouble, just anything you can think of. It’s been rough for us.

“Things definitely weren’t looking good after Senoia, but thankfully Vic Hill helped us out so we could make it (to Needmore) and stay on the rest of the tour. I’m really glad he did because this made things a lot better.”

Missing Friday’s hot laps was a setback, but Baker was able to use his knowledge of his home track to overcome it through the remainder of the night.

“It kind of threw me off and we had the wrong setup on there for qualifying,” said Baker, who ran regularly at Needmore in Crate and Limited Late Model divisions for five years before making the jump to Supers this year. “I didn’t qualify anywhere near where I needed to. But we tightened up for the feature and it got a lot better.

“I went with a harder tire in the feature and it didn’t come in like I thought it would at the beginning. It took about 15 or 20 laps, but when it came in, it really shot off. I passed a few cars and a couple cars spun out and the next thing I know I’m fourth. Then we got third and almost had second. I’m definitely happy with that.”

With the Southern Nationals officially at its halfway point, Baker plans to follow the series for the remaining six races. He hopes to find more success in two more stops in Georgia — Screven Motor Speedway on Saturday and Cochran Motor Speedway on Sunday — before heading back to uncharted territory for the tour’s final four races in North Carolina and Tennessee.

“I feel like it could be a turning point for us,” Baker said. “Hopefully we can keep it going (at Screven and Cochran), but there’s still some tracks later on that I’ve never been to. It’s tough when you go somewhere new and you’re racing against these tough fields. But I know it’s part of the learning process, and that’s what our main focus right now is, learning and getting better.”

“I went with a harder tire in the feature and it didn’t come in like I thought it would at the beginning. It took about 15 or 20 laps, but when it came in, it really shot off. I passed a few cars and a couple cars spun out and the next thing I know I’m fourth. Then we got third and almost had second. I’m definitely happy with that.”