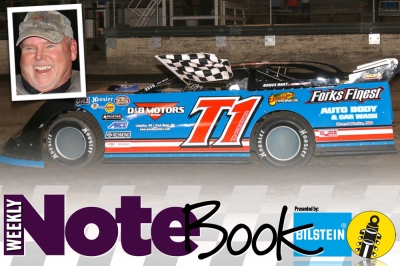 It was satisfying for Tom Corcoran to still be racing competitively in his 50th season last year. But the veteran East Grand Forks, Minn., racer had one more itch to scratch.

“I guess trying to get wins in six decades was one of the main reasons I came back this season,” Corcoran said. | Weekly results

And while coronavirus restrictions delayed the opening of the season, Corcoran didn’t take long in accomplishing his goal. Starting on the pole at River Cities Speedway in Grand Forks, N.D., on Friday, Corcoran led all 20 laps of the WISSOTA-sanctioned main event to complete his six-decade accomplishment and earn a spot in DirtonDirt.com's Weekly Notebook presented by Bilstein Shocks.

“I started the evening out, I came in the back gate with a terrible draw, started at the back of a heat race and was not very good in the heat race,” Corcoran said of his fifth 2020 start. “I got a break and got third in the heat and ended up in the point-average redraw, and started on the pole. It was one of those nights where things kind of fell together ... It doesn’t happen often and I’ve been on the other side of the coin enough times I’ll definitely take it.”

An appreciative crowd celebrated the graybeard racer’s success that started with his first victory in 1974 and continues in 2020. His previous win came July 8, 2016.

“Of course I had won fairly consistently through the 2000s, and I won in 2010, and things kind of dried up for a few years and I didn’t win again until 2016. The ’16 victory was kind of special because I was about two months out of having a hip replacement.”

Corcoran, who retired in May 2019 as maintenance tech for East Grand Forks Public Schools, was eager to pursue his six-decade challenge.

“Last season, we celebrated the 50th anniversary season, and got pretty competitive again. So early this spring, or late last winter, we sent the car back over to Jimmy Mars at MB Customs. We put the updated front end on it and I really kind of decided I was going to go after it this year.

“I’m reasonably healthy at — I’ll be 66 this next month — but it’s kind of nice, I retired from work about a year ago, so I’ve got time to devote to it, and as long as I’m competitive, I’m happy racing.”

He knows he’s in the rare breed of racers still competing when many drivers call it quits many years earlier.

“I think a lot of it’s individual. I think once you find something like this and experience some success, you continue to strive for it. Even through the tough times, you still have that desire to go fast,” he said. “Of course, any time you have a couple of down seasons in a row, you get down on yourself and you start thinking about, ‘Well, maybe it’s time to quit.’ But the overlying thought that I can still drive the race car and still be competitive always seems to pull me back through.”

Corcoran’s recreation has always revolved around racing and he was among co-founders of the Northern LateModel Racing Association, an upper Midwestern tour that just opened its 23rd season. Corcoran’s co-founders were Jon Bittner, Kevin Thompson and Greg Frokjer, and Corcoran went on to win five NLRA events and was the tour’s runner-up in 1999.

“It’s been a blessing for local racing up here,” Corcoran said. “When we did start that, we were on the verge of losing Late Model racing up in this area.”

Corcoran realizes he’s been fortunate to see a long stretch of Dirt Late Model racing from home-built machines up to today’s technology-focused machines.

“At this point in my career I’m kind of the missing link. Early in my career we were racing against (Hall of Famer) Rick Aukland and more recently it’s been (2018 World of Outlaws Morton Buildings Late Model Series Rookie of the Year) Ricky Weiss.

“I guess my favorite era, outside of today, is probably the ’80s with the wedge cars. I was fortunate I’d bought a wedge car from Rick Aukland, and I think between 1984 and 1985, I probably won over 75 percent of the events I entered those two years. Those cars were absolutely fun to drive. And I realize why they faded away, but I can only imagine today how fast they’d be given today’s suspension technology.”

So what’s next for Corcoran? Staying behind the wheel until 2030 to add yet another winning decade to his career?

“Boy, that’s a long ways away,” he said with a laugh. “I’d love to say that I could go for it, but I know the clock is ticking.”

• Hometown driver Nick Deal rallied from his 10th starting spot June 27 at Shelby County Speedway to stay perfect with his fourth Late Model victory of the season in Harlan, Iowa.

• Winning one of two Limited Late Model features June 27 at Hagerstown (Md.) Speedway, Garrett Walls of Taneytown, Md., grabbed his first victory in the division. Tyler Emory won the other feature and a $1,000-to-win shootout among the top three drivers from each feature.

• North Alabama Speedway in Tuscumbia announced its Rock Hard Weekly Challenge for Crate Late Models during the track’s 20-lap weekly feature events. Front-row qualifiers will earn a $50 bonus if they elect to start in the rear of the field and a $1,000 bonus if they can start in the rear and win the main event. There must be at least 16 cars for the bonus, which is sponsored by Dowdy Welding & Fabrication and Rock Hard Wheel Covers.

• Mike Fulp, owner of 311 Motor Speedway in Pine Hall, N.C., said he received death threats, lost sponsorships, employees and was forced to cancel June 27’s Stand for America race program for safety reasons after he drew scorn for a social media advertisement, according to the Greensboro (N.C.) News & Record. Fulp, who apologized for what he termed a joke, drew national attention for offering to sell “Bubba rope” at the conclusion of the FBI investigation into a noose-tied garage door pull in the garage of African-American racer Bubba Wallace at Talladega (Ala.) Short Track. A YouTube video also showed Fulp discussing recent events with Black Lives Matter representatives who came to the racetrack. “It breaks my heart, man,” Fulp said, telling the newspaper he’s not a racist. “Because I see a lot of hate. I don’t want nobody to hate me. I’m not a bad dude.”

• Bedford (Pa.) Speedway and other Pennsylvania tracks mourned the June 26 death of Tom Gill, a longtime Dirt Late Model team owner and track supporter who died in an automobile accident in his Altoona, Pa., hometown at 78. “Tom, with (wife) Mary Ann alongside, was at Bedford each and every week, helping in anyway that he could,” according to the Bedford Facebook page. “He was a great friend to all who knew him. Tom will be greatly missed and we ask that you keep Mary Ann and their family in your prayers.” Gill’s No. 55 was driven by many drivers over the years including Larry Wright, Davey Johnson, Bob Wearing Jr., John Britsky, Andy Fries, D.J. Troutman, Rick Singleton and Shawn McGarvey

• A Limited Late Model jumped the wall and went through a fence and into the grandstands on June 27 at Laurens County Speedway in Laurens, S.C., injuring four people but none with life-threatening injuries, according to the track. Two victims, including a teen-aged female, were airlifted to a Greenville, S.C., hospital while two others went to local hospitals by ambulance, according to the Laurens County Advertiser.

• With the Covid-19 crisis halting East Bay Raceway Park’s plan for its March banquet, the Gibsonton, Fla., track has decided to scrap the celebration of the 2019 season. Prepaid banquet tickets will be refunded while points money and trophies can be picked up at the track office Tuesday-Friday 10 a.m.-4 p.m. starting July 7. Call (813) 677-7223 for details. The track is dark until August.

Florence Speedway, Union, Ky. (July 2): The northern Kentucky half-mile oval gets back to action with a $5,000-to-win Super Late Model event live on DirtonDirt.com and FloRacing.

Dixie Speedway, Woodstock, Ga. (July 4): The 3/8-mile oval welcomes fans back for a $3,000-to-win event for Super Late Models; regular divisions are in action along with a demo derby.

Elkins Raceway, Kerens, W.Va. (July 4): The track returns to full capacity and plans fireworks as part of a program with $2,000-to-win Super Late Models; Crates are among other divisions.

Lake Cumberland Speedway, Burnside, Ky. (July 4): A fireworks display is planned along with the Freedom 30, a $2,000-to-win Super Late Model event with four other classes in action.