After rough start, Walker on winning track at Wheatland 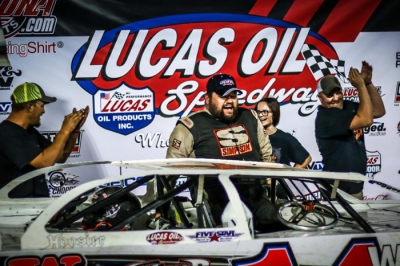 The 38-year-old dirt-track veteran from Polk, Mo., about 25 minutes away from the speedway, spent some time driving open-competition Late Models after working his way through street stocks on modifieds early in his career.

"I've been racing dirt since I was 21 or 22. I started in street stocks at Adrian Speedway, then moved to modified. Then I thought I needed to be frustrated all the time and started racing open Late Models," Walker said with a laugh. "And if the cattle market wasn't bad and utility construction wasn't bad, we'd still be open Late Model racing.

"But it's really expensive to be able to do it. So we're racing the class of Late Models that we can afford to compete in and having a good time."

This after a not-so-good time to start the 2020 season. Walker didn't even officially record a lap in the season opener after being caught up in a wreck involving Jason Sivils' car, which landed upside down on the front straightaway. Then a week later, Walker's Rocket XR1 landed on its lid, leaving him buried in the point standings with the season barely underway.

"The beginning of the season was horrible," Walker said. "I don't know how much worse you could get. The first week we didn't even get to take the green flag. Then we flipped that car the following week and had to switch over all my stuff to a different car for week three and week three wasn't that great either. But we did at least get to finish a race."

Walker found himself in victory lane the next week, in his MB Customs car. He won again June 20 at the Midseason Championship and now has momentum on his side entering the special Thursday program to kick off the Fourth of July Weekend.

Walker will be looking to run up front again. He's hit on a winning formula in the car that was a backup at the beginning of the year.

"We made a few changes on the car and got a win, made a couple of more changes and had a lackluster finish and went back to what we had and got a win again," Walker said. "So, I think we're gonna leave it along and see if we can't get three."

Walker said his MB Customs ride has been a dependable car for him, carrying him to a ULMA victory in 2017 at Lakeside Speedway in Kansas City, Kan.

"We decided to go back with what we had the best of luck with, with these hard tires and it seems to be working so far," Walker said. "With the Rocket, the chassis wasn't bad, we just never could get a shock combination that agreed with me. I think the chassis on the MB just fits me a little better and the shock package that Chris Mars (of MB Customs) put together for these hard tires really seems to be working."

Walker is competing on a regular basis again after doing racing since buying his Polk County farm in 2017 as business took precedence over racing.

"Last season we got to where we could save enough money to get a car and a motor and ordered a trailer over the winter," he said. "We're trying to get back to it. Being This close to Wheatland, it would be hard to race anyplace else. We're just gonna stick with this."

Walker is 38 points behind Cole Henson for the track points lead, but Larry Ferris and three-time reigning champion Johnny Fennewald are between him and the lead.

"I wish our season had started better. I'm not sure if we won every race left that we could win the points deal, but we're definitely gonna try to do the best we can and try to win some more races," he said. "That's all we can do right now. But I'd like to have the first two weeks back, for sure.

"I think the points championship has left us, so all we got left is bragging rights and try to get the most wins."