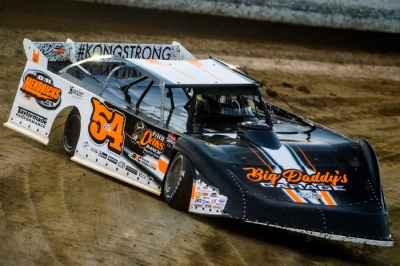 Dane Dacus is as selective as it comes when mapping out a race schedule. There’s no grand plan — other than making sure he’s not racing every single weekend of the summer. The veteran driver from Lakeland, Tenn., said that as he’s grown older, his business and family are top priorities, so he typically sits down with Randy Korte — the former driver turned consultant from Highland, Ill., who does the upkeep on Dacus’s car — and plots a plan.

“I don’t race without him,” Dacus said. “Pretty much if we’re racing, he’s going. We try to sit down at the beginning of the year and make a schedule out. He may say, ‘Ok I’ve got this weekend, this weekend and this weekend I kinda need to go do some stuff, but if you want to race, we’ll work around it.’ So we try to get stuff lined out like that. A lot of our stuff is (not firm), especially these days because you never know what’s gonna come up with the business or the family stuff. I don’t want to race every weekend. I’m over that. I like to race two or three weekends and then take off a week or two.

“The way our deal is with the family business (O.H. Hendricks Sheet Metal in Memphis) and with what the kids got going on, we just kinda hit and miss these days. If a race looks funs and looks like it’d be interesting to go to, we try to make it.”

One track that’s almost always on Dacus’s radar is Thunderhill Raceway Park in Summertown, Tenn. Though it's 160 miles from his home, Dacus rarely misses one of Thunderhill’s special events. And with good reason — he’s had a lot of success at the high-banked, quarter-mile oval in southern Middle Tennessee that will have its event streamed live at DirtonDirt.com.

“We originally talked about about going to West Plains (for the Comp Cams Series doubleheader) until (Saturday’s Southern All Stars race) popped up,” Dacus said. “We were kinda heading there and then this race popped up and I thought, heck I’d rather go to Thunderhill as West Plains. It’s about the same drive, but at least I can work Friday and leave out Saturday and go to Thunderhill vs. West Plains, which is Friday and Saturday. We’re fortunate. We’ve been blessed through this whole (coronavirus) deal that we’ve got a lot of work going on and I need to be here Friday, especially with it being a holiday on Monday we need to ship as much stuff out on Friday as we can.”

Dacus is a three-time Southern All Star winner, with two of those triumphs coming at Thunderhill. He won there in July last season and in 2017. He also finished second behind Ashton Winger in last year’s August SAS race at Thunderhill.

“We just always seem to run decent there,” Dacus said. “There’s been a few times that we’ve had some bad trips and bad finishes at the end of the night, but for whatever reason, we just seem to run decent there. It’s kinda weird. We don’t to anything different with our setup. We don’t do anything special there. We just seem to run good there. That’s one of the places we run decent at. I think we led some laps (last August) and got passed toward the end of the race there (by Winger).”

“I think the first couple of times we went there we kinda struggled. And then it just seems here lately things, even nights where we didn’t have the best car underneath us, things seemed to work our way and we were able to gain some positions. For whatever reason we just have had a lot of luck there. I can’t really explain it.”

Dacus admitted that Thunderhill isn’t for everyone. Comparable to high-banked Tazewell Speedway in east Tennessee, Thunderhill requires an adjustment for most drivers. While it’s not quite as steep as Tazewell and it doesn’t have the foreboding walls around the inside or all the way around the outside, Thunderhill’s lack of a wall through turns one and two and on the backstretch — an absence that leaves drivers wary of the considerable drop off on the other side — can be just as daunting. The track is fast, too. With laps often in the 11-second range, a caution-free 25-lap feature can click off in five minutes.

“I think the banking messes people up,” Dacus said. “And for what it is, it’s a pretty fast little racetrack at times for as small as it is. I think over the years, you never know what you’re gonna get, especially here lately. That’s no knock to the track prep. It just seems like it’s always different.”

Regardless of its unpredictable surface, Thunderhill remains a go-to track for Dacus, especially when hosting regional tours, which he said he prefers.

“When I roll in the pits I like to know that everybody’s on the same page on the tech end,” he said. “I don’t wanna be going to no Tire Prep Nationals or anything like that or the Deck High 75. I don’t like those kinda races. When I was younger, any time the pit gate opened I wanted to go, but now, the older I get I look back at some of those races and I’m like, hell, I’d been better off going to another race where I know everybody’s on the same rules.

"I try to support all my local stuff that I can, but either way, we’ve still gotta drive … the closest racetrack right now to us is three and a half hours. Really Magnolia (Motor Speedway in Mississippi) is the closest place that races consistently Late Models.”

That means he and Korte spend a lot of time on the highway when they do decide to race, wherever that may be.

“I think the closest place we raced last year was two hours from the house, Harrisburg, Ark.,” said Dacus. “We raced there one time last year and that was two hours from the house. Other than that, we’re driving three to five hours every weekend … or every race. Depending on what time they get over, a lot of times we’re pulling in the driveway at 5 of 6 o’clock in the morning from a lot of racetracks. It just depends. If you leave a track at 2 in the morning and drive four hours home, the sun’s coming up when we’re pulling in.”

Thunderhill: Saturday for Southern All Star competition in Summertown, Tenn.