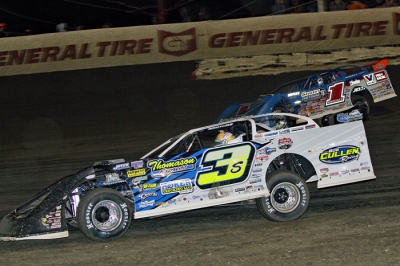 GIBSONTON, Fla. (Feb. 8) — Drivers who come to East Bay Raceway learn to expect the unexpected at the third-mile oval where lore suggests that tides from the nearby bay affect the trickiest dirt track surface in the country.

The loamy clay surface developed a slickness that tested the throttle control of all 30 Wrisco Winternationals drivers in the $12,000-to-win Lucas Oil Late Model Dirt Series event won by Brandon Sheppard of New Berlin, Ill., a three-time winner during the six-race miniseries.

Said front-row starter Billy Moyer Jr. of Batesville, Ark.: “I have never seen nothing like that.”

Three-time and reigning Lucas Oil Series champion Jonathan Davenport of Blairsville, Ga., likened the surface to “polished concrete with baby powder on it” in finishing ninth.

“I think a lot of people got caught off guard,” said winning car owner Mark Richards.

The devilishly slick surface forced most drivers — with their motors barely above an idle — to hug the infield to find the least bit of traction on a track where wondering into the middle or high groove meant trouble.

In most “train races” where drivers follow each other in a single groove, the surface is locked down with a rubber strip that provides the ultimate traction. In Saturday’s case at East Bay, it was just the only place drivers felt remotely comfortable — so that’s where they stayed, except for the occasional daring high-side move like Sheppard made on Devin Moran of Dresden, Ohio, on the 38th lap for the winning pass.

“The bottom was icy slippery,” said sixth-place finisher Rick Eckert of York, Pa. “The rest of it was severe ice.”

While Moyer’s quick qualifying time a few hours earlier was 14.485 seconds, most drivers were turning laps in the 18- or 19-second range during the feature, creating a slow-motion race where observers sometimes wondered if officials had thrown a caution flag invisible to everyone but the drivers.

Moran’s crew chief and brother Wylie Moran could barely believe what he was seeing — or hearing.

“I was standing (at the exit of turn) two, signaling (Devin), and I wear earplugs but I can still hear perfectly fine, and I couldn’t even tell they were racing. They went through so quietly,” Wylie Moran said. “That’s the slickest track we’ve ever been on — ever. We have a place at home, Skyline (Speedway in Stewart, Ohio), and it’s slicker than anywhere in the country, but tonight was slicker. It was legit an ice rink.”

On the last restart with eight laps remaining, Richards wasn’t even sure his winning car or anyone else had reached racing speeds.

“Listen, they threw the green flag and I was standing on the four-wheeler, and I’m like, ‘Why ain’t we going?’ I said, ‘Is the caution back out?’ No, the caution ain’t out.”

The veteran chassis builder and team owner hasn’t seen such conditions often — he recalled nights at Hibbing (Minn.) Raceway and Eagle (Neb.) Raceway when lap times fell way off in slick conditions — but it was a first for him at East Bay, where he’s competed more than 100 times. He had his theory about the circumstances.

“What happens when it rains, the track actually gets grippier, like (Friday) night. I know it sounds crazy that it rained and got grippier, but like tonight, when you water it with the water truck, it’s different than the rain,” Richards said. “The rain actually washes the sand up. Tonight, the sand wasn’t at the top. When I went out there and looked at it I knew it was greasy. There was no grit. Last night there was grit.

“But the air’s a little dewy tonight. It’s a little cool, and there was the dampness from where the rain was (overnight Thursday), but it got real, real greasy.”

“It was just weird. I felt like when they went out and packed the track, it actually really sealed up. Like the track got hard,” Shirley said. “In my mind, the tide was out, because the water never bled back. Then when we had to stay out there (during breaks for TV commercials), I think the heat on our exhaust just dried the track up, where it was so crummy and there’s just nothing there.”

Sheppard and others dabbled with high-side runs throughout the race, but most ran into trouble — Boom Briggs slapped the turn-one wall just before the halfway point of the 50-lapper — or ended up retreating to the low groove after losing ground. Richards figured, though, that Sheppard’s best chance to overtake the leading Moran was to make the high side work.

“The only way he could make it was in (turns) one and two. That’s what I told Dan. I texted Dan to tell him that when he gets away from the third-place car, put him on the top in one and two. That’s the only place we’re gonna be able to pass,” Richards said. “I said when he’s got a big enough lead (on third place) and he gets messed up, then he get back down. But he done burn him a path up there, and he kind of had idea when he caught him where he wanted to go.

“It was greasy up there, but they were stopping so much in the bottom, the motors weren’t even running 2,000 or 3,000 rpms on the bottom. And there was some stuff up there to launch in off of two.”

Wylie Moran had no suggestions for his brother other than to stick with the bottom until the finish.

“He knew Brandon was close and he knew Brandon was out there, but I can’t tell him to go (to the high side) the way it is,” the crew chief for the runner-up said. “He went in there and it just kind of pushed a little bit, and that was the best lap Sheppard had through the top of one and two. Wrong place, wrong time.”

The entire race was “weird to watch. I don’t even have the right words for it,” Wylie Moran said.

“I don’t know if Devin slipped up a little bit, but this place, if you slip, it’s not like a tenth (of a second) or two. It’s like a second,” White said. “It takes one push where you’re not bent right and it’s over. Brandon might have hit it just right and he slipped, and that was it.”

In a sport where drivers are hired to make cars go fast, they ended up putt-putting around as slow as they’ll likely go all season.

“It was so slow. That last restart, we went down in there, and I could hear the motor idling we were so slow between (turns) one and two,” Davenport said.

Added Sheppard: “Dan was trying to slow me down at the end of the race so we wouldn’t catch lapped traffic, and I was like, I don’t think I can go any slower, the motor’s about to die as it is.”

White chalked up the race as “really weird” as the Rocket Chassis car team wrapped up a successful week.

“That last restart, when it was single-file, I really thought they threw the caution back out because they weren’t going. Then they rolled into one and two so slow and Brandon got going, but behind him, I’m telling you, it was almost like … it wasn’t even close to rubber, but that’s what it raced like. You couldn’t get out of line.”

“In my mind, the tide was out, because the water never bled back. Then when we had to stay out there (during breaks for TV commercials), I think the heat on our exhaust just dried the track up, where it was so crummy and there’s just nothing there.”