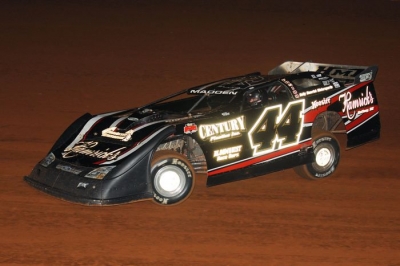 CROSSVILLE, Tenn. (July 22) — Chris Madden of Gray Court, S.C., nabbed his fourth victory on the seventh leg of the O'Reilly Southern Nationals at Crossville Raceway to pull back into a tie for the points lead with fellow South Carolina driver Dennis Franklin of Gaffney with three events remaining. | Slideshow

Madden took control with just three laps remaining in the 35-lapper with race-long leader Anthony White's departure and he outran his rival Franklin to the finish line. Only Madden and Franklin have reached victory lane on the tour, promoted by North Carolina driver Ray Cook. Polesitter Rick Rogers of Knoxville, Tenn., finished third followed by Ronny Lee Hollingsworth of Northport, Ala., and Billy Ogle Jr. of Knoxville. White, who started outside the front row, was listed 14th in the final rundown. The feature event was slowed by five cautions, including two in the final three laps.

Notes: Madden has a series-leading 10 career victories, all from 2007-08. ... While Madden and Franklin are tied with 1,032 points, they're followed by Tony Knowles (956), Brandon Kinzer (952) and Shon Flanary (886). ... Ronnie Johnson was the PPM Racing Products Hard Charger with his 17th-to-ninth run. ... Eric Jacobsen of Santa Cruz, Calif., was third fastest qualifier, but he came up 20 pounds light at the scales; he scratched for the remainder of the night. ...ï¿½ Scott Jones was offered a provisional, but with just one provisional remaining for him, he elected to save it for later in the tour. ... The series remains in Tennessee for the final three races July 24-26 at Cleveland Speedway, Volunteer Speedway in Bulls Gap and Tazewell Speedway.