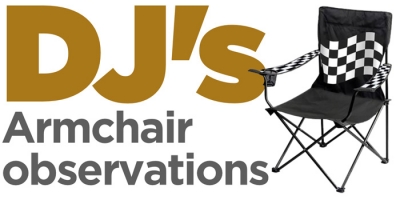 From back home in Ohio, Dustin Jarrett’s daily recap of Georgia-Florida Speedweeks, the Feb. 1-16 action at six tracks in the Peach and Sunshine States. Look for another edition the morning before each night’s action (complete Speedweeks coverage):

If you watched Monday’s feature, you saw East Bay at its finest. Side-by-side action, Multi-groove racing, and wholesale track changes in the feature. But I couldn’t help but notice the track seemed to change even more suddenly than it usually does. More specifically, at the drop of a hat, the top side of turns one and two seemed to vanish.

“Yeah, the little bit of grip that was up there got to be too far out coming off turn two,” Jonathan Davenport told me via text Tuesday morning. “With the way the track is shaped, I would have had to be way too sideways to go down the straightaway straight. So, for me, I couldn’t really use (the high side of turns one and two) anymore.”

Brandon Sheppard also touched on it during the Speedweeks Minute.

“Getting into one, it’s like the stoplight. You’re just kinda sliding across it, not really knowing where you’re going to end up. And then, as soon as you hit a brown or a dirty spot, you just lay it on the mat and hopefully your car’s good enough or has enough traction you can pull out of it,” Sheppard said.

Turn-two’s trickery was once again evident Tuesday night with several drivers opting to stay locked to the bottom with only a few venturing to the top side.

“I didn’t wanna restart on the high side,” Pearson said about his top lane on the restart in Tuesday’s feature, “but I said ‘I’m gonna give it a shot right here and see if I can go around and see if there’s a cushion up there’, but that didn’t work out.”

Noticeably absent from Speedweeks this year is Bobby Pierce, who is currently racing a Super Saloon in New Zealand for the second time in his career. Even though he’s not racing here in the U.S., the Oakwood, Ill. driver is trying to keep tabs on the Georgia-Florida races.

“I only watched the highlights from East Bay,” Pierce told me Tuesday. “I’m not always on Wi-Fi though.”

As you might imagine, the time difference is a big hindrance for him as New Zealand is some 16 hours ahead. So, when it’s Thursday in New Zealand, we’ll be racing our Wednesday feature at East Bay.

“Yeah, with the time difference, I’d have to watch (live) during the day and that’s when we’re doing stuff. Heck, I didn’t even watch the Super Bowl,” he admitted.

So far, Pierce has run one race in New Zealand and was working his way through the field when a flat tire forced knocked him out of the race.

• My favorite James Essex line from last night: “Big Sexy trying to go slim sexy on the bottom!” (as Brandon Overton trying to take second in his B-Main).

• Speaking of which, it was pretty cool to see some fresh faces running near the front of the heats Tuesday night. Guys like Buckingham, Morgan Bagley, and Colton Flinner were all impressive.

• It’s really good to see 38-year Winternationals veteran Bob Geiger back at East Bay. He may not be a top contender, but he’s an East Bay staple.

• Gregg Satterlee’s beard deserves its own mention. So here it is.

• I texted one driver and asked him what he had to do to get a win and he responded back: “Put a no. 1 on the side of the car.”

• I have to chuckle a little at the people who call Tyler Erb “Turbo” and not “Terbo”.

• I can’t help but notice that Brandon Overton has been just a tad off so far in Speedweeks. It’s a bit of a surprise considering he had solid runs a few weeks ago in Arizona.

• I missed part of Tuesday’s action as I was calling a high school basketball. It wasn’t long before I was caught in the act and a Twitter photo soon surfaced of me watching East Bay while announcing the game.

• With that in mind, kudos to DirtonDirt.com with highlights and interviews up before midnight.

At this point, why would anyone bet against Tyler Erb? He’s won three of the four Speedweeks races and shows no sign of slowing down. Well, I’ve never been a great bettor, and it’s tough not to go with the hot hand. That having been said, I’ll keep my money on Brandon Sheppard and let it ride for one more night.