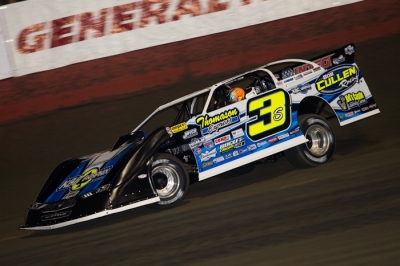 “It’s definitely not the way you want to start things off,” Shirley said while preparing to return to action in Monday night’s Wrisco Industries Winternationals opener at East Bay Raceway Park. “I was really nervous. I was waiting for the (physical) effects that I had when I flipped at Lernerville (Speedway in Sarver, Pa., on Sept. 3, 2016).”

Shirley’s Lernerville wreck, early in the World of Outlaws Morton Builders Late Model Series-sanctioned Firecracker 100, left him with a concussion that sidelined him for nearly two months — and by all accounts, his Golden Isles crash appeared to be even more violent. His Bob Cullen-owned XR1 Rocket car snapped sideways as he raced down the backstretch at the back end of the top 10 on the 20th lap and he went barrel-rolling several times before coming to rest upside down.

“Honestly, I’m not even 100 percent sure (what happened),” Shirley said. “The car just hung real bad. It went right, hard … in the center of the corner I was just going along and then, all of a sudden, I was pointing to come out of the corner and it just went straight right. When that happened, I was just a sitting duck. I just hung on and went for a ride.

“I remember the whole thing. I kept my eyes open. I seen the sky, and then I seen the ground. It got quiet, then noisy.”

Shirley wiggled out of the cockpit under his own power, dazed but otherwise apparently uninjured. He recalled that his concussion symptoms following the Lernerville flip didn’t truly present themselves until he had left the track and headed down the road to the next WoO event at Selinsgrove (Pa.), however, so he was understandably worried as he stood in the pit area afterward with his crew and time passed.

“When I did that at Lernerville, we were going to that next race and about two hours later (while riding in his hauler) my eyes went in the back of my head and started rolling,” said Shirley, whose crew immediately pointed the rig toward the nearest hospital so he could receive medical attention. “I was praying that wouldn’t happen again because obviously, with two weeks of (Speedweeks) racing, the last thing I wanted to do was go home. But I would’ve went home … if something was really wrong, I would’ve went home.

“I mean, you couldn’t race with it (aftereffects of a concussion). Like (Randy) Weaver, Frankie (Heckenast Jr.), those guys (who were sidelined after sustaining concussions in accidents in recent years), when your head is that messed up, it’s messed up. You just don’t say, ‘Hey, I’m gonna go hop in a race car,’ and think things are gonna be better, because it’s not.”

But as Shirley chatted in East Bay’s pit area late Monday afternoon, his body had not told him he needed to refrain from racing like it did back in ’16.

“Honestly, I feel pretty good,” said Shirley, who reported that he was experiencing only the slightest tinge of residual muscle soreness. “(The physical maladies) never came, so I got up (Sunday) and we started working on getting everything finished up on this (backup) car and assessed that (wrecked) car, took the motor out of it and other things so when we can get home we can starting getting it fixed.

“I firmly believe that I’m good. I feel good. I worked all day yesterday, and you wouldn’t be able to do any of that if I wasn’t right. I know from when it happened at Lernerville. You didn’t get out of bed (because of headaches and other concussion symptoms). You literally went and looked for the darkest place you could be and sat up and hoped that the world quit spinning. I couldn’t actually lay down. If you were laying on your pillow, the world would still spin. When I started getting better and could walk around and stuff, and I thought I was getting better, it would show me I wasn’t when I would go try and lay down in bed and it happened immediately again.

“It took about two months (to recover),” he added. “We just barely made that Charlotte race (the WoO’s season-ending World Finals); that was our first race back, so I’m just happy to be here and feeling good (two days later).”

Shirley said the car he rolled at Golden Isles actually might not have been damaged “as bad as it seems,” but it was in no condition to see the track again during Speedweeks. It was his favorite car, a machine he ran for most of his successful 2018 season — highlighted by a DIRTcar Summer Nationals title and 17 overall victories — and completely revitalized with new components for Speedweeks.

“A lot of the damage was sheetmetal,” Shirley said. “It pulled the underslung out, but we welded a new one under it this winter. The roll cage stayed strong, never bent down. The framerails … normally the fuel cell you get nervous about, but it was all intact.

“We looked at it and we’ll send it back (to Rocket Chassis in Shinnston, W.Va.). (Rocket co-owner) Steve) Baker said he’ll put it in a jig and see how it is. They’ll say yay-or-nay (on if it needs frame repair).”

At East Bay, Shirley unloaded an XR1 Rocket that he had only driven four times in 2018 (and won the feature on each occasion). He expressed confidence that “it should be good enough to win,” and he promptly piloted it to overall fast-time honors in Monday’s qualifying session. The rest of the night didn’t go quite as well for Shirley, though; he slipped backward from the pole position to third at the start of his heat race, conceding that he was hampered at the initial green flag by the “mental game” a driver faces when trying to jump right back up into the fray after a hard crash and the adjustment he had to make to running his backup car that he said “feels different.” He rallied to run down the leaders before sliding sideways between turns three and four and killing his engine as he made a bid for second, causing him to bring out a caution flag and end up using a fast-time provisional to start the feature.

Despite the disappointing end to his East Bay opener (he retired early in 25th), Shirley remained positive in the wake of his rough start. With a car owner whose resolve wasn’t shaken by the crash, Shirley had no choice but to press ahead.

“Like Bob said, it’s just racing,” Shirley said of Cullen, who will join the team in Florida for the Feb. 11-16 DIRTcar Nationals at Volusia Speedway Park in Barberville, Fla. “His wife and him texted me and I called him as soon as it was over. They said what anybody would say — they’re just thankful that nothing bad happened. We can buy more race cars. Bob said we got a brand new one sitting in the shop ready to go, so we’re full speed ahead.”