Trivia Time: Do you know your Speedweeks history? 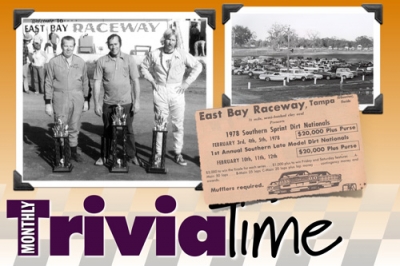 Part of a continuing feature at DirtonDirt.com, test your Georgia-Florida Speedweeks knowledge with a 20-question quiz about off-season action in the Southeast (complete Speedweeks coverage; click here for answers):

1. Which one of these former NASCAR Cup racers never scored a victory in a Florida Speedweeks Dirt Late Model event?

2. During past Florida Speedweeks, where was the Kendall GT Winter Series for Dirt Late Models contested?

3. What annual Speedweeks gathering began in 1978 at the Plaza Hotel in Daytona Beach?

5. Which Dirt Late Model great was the first to pilot Chrysler-powered Mopar machines to STARS, WoO and Lucas Oil victories at Speedweeks?

6. Which of these sanctioning bodies has never scheduled a race during Florida-Georgia Speedweeks?

7. A two-parter: In 1978, what was the original name of the inaugural East Bay Nationals, and who was the promoter who started it?

8. What near catastrophic events occurred for Dirt Late Model Hall of Famers Freddy Smith and Bob Wearing during the 1979 Florida Speedweeks?

9. Which multimillionaire sponsored Florida Speedweeks events in the 1980s?

10. Who has not captured a Florida Speedweek series title?

12. In 2000, what standout driver and historic Dirt Late Model team — also known as the “Odd Couple” — connected prior to Speedweeks, but quickly unraveled within a month’s time?

13. Another two-parter: During 1977 and ‘78 Speedweeks, a two-day Dirt Late Model series was contested at Ocala and Lake City. What was it called and what organization sanctioned it?

14. Which former Floridian racer known as the “Flying Fisherman” captured a trio of Southeastern Winternationals series titles at Volusia County during the 1970s?

15. What monumental announcement was made in the year 2000 at the annual RPM Promoter’s Workshop held at Daytona Beach in conjunction with Florida Speedweeks that stunned the Dirt Late Model world?

16. Which original Florida Speedweeks stronghold that hosted the four night “Sunshine Speedweek Dirt Track Classic Series” in 1971 and ‘72 was closed permanently in 1973 for not having building permits?

17. Who is the youngest Dirt Late Model pilot ever to capture a Florida Speedweek feature event?

18. Who masterminded and promoted the first Southeastern Winternationals at Volusia County in 1972?

19. Which Eldora Speedway track champion came to Florida to get married and honeymoon with his newlywed, yet ended up behind the wheel and winning Volusia's Speedweeks finale? 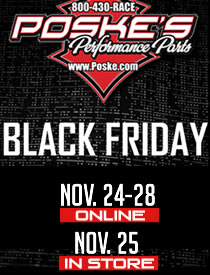