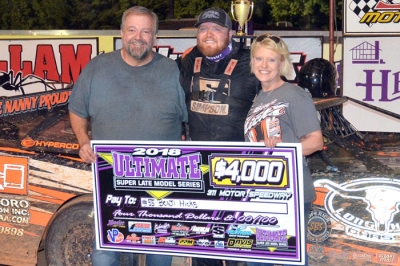 The May 25 race program in Pine Hall, N.C., was a special one for the Hicks family. On a night when 311 Motor Speedway honored the racing family’s patriarch Bill Hicks Sr., his son Tony promoted the race, another son Billy owned the winning Crate Late Model, and his grandson Benji Hicks won his first Super Late Model feature.

The second annual Bill Hicks Sr. Memorial put the spotlight on the family with Benji shining the brightest of all.

“I put on this race for dad; he passed away at 311 back in 1991,” Tony Hicks said. “He was always there for us boys, helping out with whatever we needed. Between Billy, (brother) Mark, and myself we collected over 400 wins and Dad was never in a victory lane photo. He was always the name without a face.”

But the Hicks name lives on at various Carolina tracks and likely will for years to come with Benji Hicks stepping up from the Crate Late Models for a $4,000 Ultimate Southeast Series triumph.

Benji, Tony’s son, was born in 1995 and had never met “Pa Bill,” who Benji has long heard stories about.

“They always say that if you tell stories about someone that they live on,” Tony said, “and Benji loves him and feels like he knows him even though he never met him.”

Benji Hicks had just a handful of Super Late Model starts heading into the 311 event that drew 24 competitors.

“We got off to a tough start in qualifying,” Benji said, “but on the second lap I decided I was going to give it all I had and never lifted. That got me the third starting spot in the feature.”

When the green flag dropped in the main event, Hicks fell to fifth early in the feature. However, he was able to work his way back up to third, closing in on second-running Johnny Pursley.

“I’m still learning throttle control in the Super; it’s a lot different from the Crate,” Benji Hicks said. “I wanted to make sure I still had tires left for a late-race restart.”

“My spotter was showing me that I was pulling away, and that’s when all the emotions hit me going down the backstretch,” Benji Hicks said. “Last year was the first Bill Hicks Memorial and I felt like I let my family down finishing third. I know they were proud of me, but I really wanted to get the win.”

It was an emotional victory lane as Benji Hicks dedicated the victory to “Pa Bill” and other family members.

“It was tough to keep it together in victory lane,” he said. “I was definitely pumped to win an Ultimate race. There’s always several guys here that can win it, and it made it even better to do it in front of a hometown crowd on such a special night.”

In opening ceremonies, Benji Hicks made a reverse memorial lap to honor Bill Hicks, and a drizzle fell on the half-mile oval as the Kenny Rogers version of “Wind Beneath My Wings” played over the loudspeakers.

“Tears from heaven are falling on Benji as he makes his memorial lap,” announcer Wesley Outland told the crowd.

Besides Benji’s victory, his uncle Billy fielded the No. 79 car that Ross Bailes drove to a Fastrak Racing Series victory for the Crate Late Model division on the same night.

“It was a blessing to win a race associated with our family,” Billy Hicks said “I was able to look up at where Dad always sat at 311 and it felt like he’s still watching us. I’m very proud of Benji, he definitely had an extra wheelman with him Friday night.”