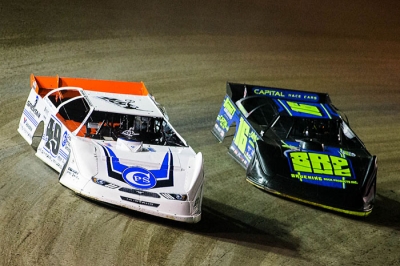 One year after Bruening, 32, of Decorah, Iowa, failed to qualify for a single feature in six Georgia-Florida Speedweeks events spread between two tracks, he kicked off his 2018 campaign with a truly uplifting performance.

“All in all,” Bruening said in Volusia’s pit area after the headliner, “it was just a phenomenal night for me.”

Debuting a Capital Race Car, Bruening was solid from the evening’s first green flag to its last. His off-season work to prep for ’18 showed through.

“We kind of regrouped over the winter, build a brand new Capital Race Car, and first night out on it (with no prior testing) it is phenomenal,” said Bruening, who registered a career-best Speedweeks finish. “I’m super comfortable in the car, which is the main thing here. You’ve got to be comfortable, you’ve got to be able to get around this place.

“We timed in real well tonight, positioned ourselves real nicely for the heat race and were able to capitalize on that.”

Bruening flashed under the checkered flag four spots behind Capital banner carrier Shane Clanton of Zebulon, Ga., who finished third in what was his first appearance of ’18 in a newly-designed Capital as well. The two drivers have their rigs parked side-by-side in the Volusia pit area, continuing a relationship that has blossomed since Bruening decided to join the Georgia chassis fold by purchasing a car soon after watching Clanton dominate the 2015 DIRTcar Nationals.

“That year we came down and Shane won about every race down here, we we were like, ‘Wow, what’s he got? What’s he driving?’ ” Bruening recalled. “And that’s when we first drew our attention to Capital Race Cars.

“To be honest, when we were gonna switch (chassis in ’15), we kind of sent out some feeler emails and (Capital’s) Marshall (Green) got back to us basically the next day, and we didn’t hear back from anybody else. We were sold from that point on.”

Clanton and Green have provided a definite developmental boost to Bruening, whose annual Super Late Model starts are limited because his home state isn’t a hotbed for open-competition action.

“Back home we run spec (rules Late Model) stuff, so small tires, small motor, so actually, it’s been a great thing and my program to be able to bounce things off them and get their feedback,” Bruening said. “It’s been a wonderful combination for me in that sense.”

Clanton, 42, has embraced his role giving guidance and pointers to Bruening.

“It’s what I’ve always said, I get the enjoyment of helping other racers coming up,” Clanton said. “I’ve been doing this a long time and I’ve had some mentors in my life who’ve helped me get to where I’m at for sure, so I just like to help the younger generation that’s coming up and has the will and drive to work as hard as he does. It’s just satisfying.”

With his full-time positions at his family’s businesses — safety director at Bruening Rock Products and manager of the drilling company that drills their quarries — Bruening generally keeps his racing closer to home save his trip to Speedweeks (he first entered Speedweeks races in 2009) and selected other Super Late Model specials. He hopes to increase his open-competition workload this season, however, not only taking advantage of the uptick in national-tour events coming to Iowa but also making some excursions to race alongside Clanton.

“We’re gonna race around home like we usually do (in spec events) but we’re going to try to race down here as much as we can,” said Bruening, who made 46 overall starts in 2018 and won six features (spec shows at Iowa’s Farley, West Liberty and Independence). “We just want to race with Marshall and the Capital group and continue to develop our program, try to continue to get better.”

Clanton sees potential in Bruening and will do everything he can to assist the young driver. The veteran thinks Bruening’s opening-night run at Volusia with his promising Capital mount — according to Green, Bruening’s and Clanton’s cars feature the first complete chassis redesign Capital has pushed through since the company’s launch — can act as a springboard to more success.

“I’m sure it’s gonna be a big confidence booster for him,” Clanton added. “Him and his dad (Greg) are two of the greatest people you’ll ever meet. They don’t ever get down … when they’re struggling a little bit, they’ll say, ‘We’re gonna work on our cars and we’ll get better, don’t worry about it. We’ll just keep working and working.’ That’s what you do. This sport is driven off how hard you work, and obviously we worked pretty hard over the winter to get where we’re at and hopefully it just carries over to this year for them and us.”

“We’re gonna race around home like
we usually do (in spec-engine events) but we’re going to try to race down here as much as
we can. We just want to race with Marshall and the Capital group and continue to develop our program, try
to continue to get better.”