Information provided by: Series and staff reports (last updated May 5, 3:14 pm)
O'Neal tops Davenport for $12,500 at Magnolia
King of Mississippi 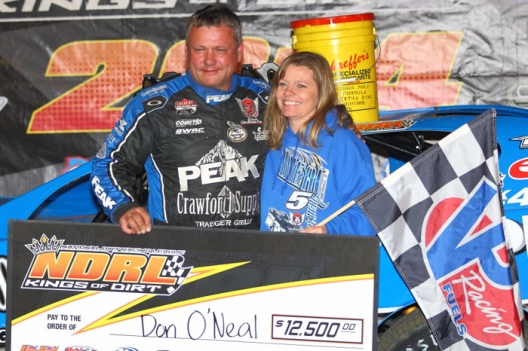 The remainder of the distance belonged to O’Neal, who steered the Clint Bowyer Racing Barry Wright Race Car to his first-ever NDRL triumph. He earned $12,500 for becoming the seventh different winner in the fledgling national tour’s eight points shows this season.

“Last night it was dominant around the bottom,” said O’Neal, who finished second to Chris Wall of Springfield, La., in Friday night’s 40-lap A-Main. “Tonight it was dominant on the top for the first 10, 15, 20 laps. I just got to moving down the racetrack a little bit instead of leaning up there on the little bit of cushion that was left, and I think I just found something there sort of middle and a little bit above earlier than anybody else did.”

Davenport, 30, felt that he let a potential second NDRL victory in as many weeks slip through his fingers because he didn’t recognize quickly enough that the outside line was no longer the hot ticket. Once O’Neal, who started third, snuck by for the lead Davenport was effectively resigned to a runner-up finish, which is where he took the checkered flag, 1.748 seconds behind O’Neal.

“They wet that top (before the feature) and we rolled it in there real good,” said Davenport, who started from the outside pole in the K&L Rumley Longhorn car. “We were just cruising around through there, and then I got to lapped cars and I just didn’t really know when I could move down. I didn’t have anybody signal for me. I didn’t know the rubber was coming there in the middle, and Don got by us.

“We had a good points night again, but second sucks when you’ve got that good of a car.”

Davenport started Saturday leading the NDRL points standings by 36 points over Bloomquist, but he ended it second in the battle for the championship, two points behind Bloomquist, who finished third in the A-Main. That’s because shortly before Saturday night’s action began NDRL officials announced that Davenport and Chris Madden of Gray Court, S.C., had been penalized for on- and off-track altercations following their heat-race scrape on Friday night.

As a result of the penalties — both drivers kept their finishing positions in Friday’s feature but only received points and money for last place (26th) — Davenport lost the points lead to Bloomquist.

Bloomquist, who started fourth, climbed to second early in the distance and ran there until O’Neal overtook him. He settled for a third-place finish.

“(Daveport) ran a little bit softer tire than me and O’Neal ran,” Bloomquist said. “Overall, the longer we ran we were getting better. I thought we had a shot, but I couldn’t really get my stuff to stick on the bottom of (turns) one and two early when I needed to get by Davenport….and then (O’Neal) got by us.

“I really felt like we were quicker than both of them, but it was real difficult to pass. Then Davenport got that oil leak (late in the distance) and pretty much sprayed our car and sprayed me the rest of the race, and that kind of kept us messed up.”

Billy Moyer of Batesville, Ark., advanced from the seventh starting spot to finish fourth and Madden faded from his pole position start to a fifth-place finish.

Notes: One night after tangling during a heat race and receiving NDRL points and money penalties for on- and off-track altercations, Madden and Davenport shared the front row for the start of the A-Main following a redraw. ... O’Neal’s teammate, Steve Francis of Ashland, Ky., moved up from the 10th starting spot to finish sixth despite racing with a bent left-front spindle and lower control arm. … The feature's only caution flag flew on lap 36 for Jeremy Payne. ... The track’s full pit area also included 39 NeSmith Crate Late Models. Neil Baggett of Shannon, Miss., won the division's feature.