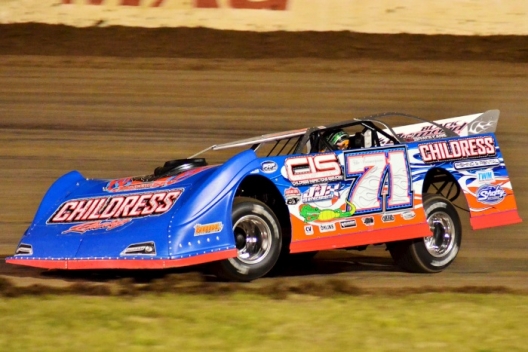 Sure, the $7,500 first-place payoff was great, but it was the satisfaction of coming out on top of a national event that thrilled the 45-year-old racer from Springfield, La.

“What stands out is we just won a race with the best drivers in the nation and I don’t take that lightly,” said Wall, who scored his first-ever triumph on the fledgling NDRL series and became the sixth different winner in seven tour points races this season. “This is the best of the best. Anytime you can win a race with these guys, you can notch your belt. You’ve done something good.”

Starting third in the 26-car field, Wall steered his Ronnie Stuckey-designed Black Diamond Chassis machine past race-long pacesetter Billy Moyer Jr. of Batesville, Ark., for the lead on lap 12 and never looked back. He kept his Childress Racing entry stuck to the inside of the 3/8-mile oval throughout the remainder of the caution-free event to take the checkered flag 2.388 seconds ahead of Martinsville, Ind.’s Don O’Neal.

O’Neal’s Clint Bowyer Racing teammate, Steve Francis of Ashland, Ky., advanced from the seventh starting spot to finish third. Moyer Jr. slipped to fourth in the final rundown after starting second and leading laps 1-11, and Chris Brown of Spring, Texas, moved up from the 10th starting spot to complete the top five.

A standout at tracks across the Gulf Coast, Wall registered one of the biggest victories of his 15-year dirt-track career. His only real headache was a spot in turn four that kept him on his toes.

“There was a hole there that was kicking my behind all night long,” said Wall. “If I got out past it I was in the slick. I needed to be under it to catch the moisture, and it was just in the wrong place. It was killing me.”

But Wall survived a costly mistake, using his strong car to stay ahead of the field at a track he’s frequented throughout his career.

“We do have a lot of laps here, but I don’t have a lot of laps here in a Black Diamond chassis,” Wall said. “We practiced last night and I’m not gonna lie, we were off a little. We put our heads together and we got (co-chassis builder) Ronnie Stuckey up here today, and we made a few key changes. And man, we had us a hot rod here tonight.”

O’Neal, 49, fought hard to finish in the runner-up spot. Though he started fourth, he lost spots early in the race and didn’t reach second place until late in the distance.

“We got a bad start there and fell back there a few spots,” said O’Neal, who ended the night tied for third in the NDRL points standings with Chris Madden of Gray Court, S.C. “That sort of hurt us a little bit, and the bottom was just dominant tonight. We just didn’t get the job done. That’s the bottom line.”

Notes: Polesitter Billy Moyer of Batesville, Ark., was outgunned for the lead at the initial green flag by his son and faded badly to finish seventh. Fellow Dirt Late Model Hall of Famer Scott Bloomquist almost went backward, starting sixth and finishing ninth. ... Southeastern rivals Chris Madden and Jonathan Davenport of Blairsville, Ga., got together on the start of the fourth heat, forcing Madden to the pits. Madden tried to retaliate before heading pitside and later took a provisional to start the main event, which he finished in the 16th spot. … Davenport placed a quiet sixth in the A-Main but maintained his NDRL points lead. … The race marked the first national touring event at Magnolia since veteran promoter Johnny Stokes and partner Charles Roberts completed a purchase of the track in March. ... Dennis Erb Jr. of Carpentersville, Ill., was absent after announcing earlier in the week that he was abandoning his pursuit of the NDRL tour. ... The NDRL King of Mississippi weekend concludes on Saturday with a 60-lap A-Main paying $12,500 to win.